Kolkata reconnects with its riverfront 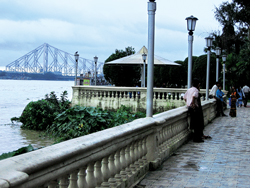 An ambitious riverfront development project has been drawing many visitors in Kolkata. The Millennium Park runs along Strand Road, for a kilometre on the eastern bank of the Hooghly river and has been a successful attempt to bring it back to the forefront of the city's landscape.

Two sections of the park, stretching over 750 m, were opened to the public on January 1, 2000, while the final section, 300 m in length, was made accessible on January 1, 2006. While people seem satisfied with the initiative, some scepticism prevails over the quality of river water. "The recreational area has not been reclaimed, only redecorated," says Chunar De, chief engineer, Kolkata Municipal Development Authority (kmda). "Therefore, unlike most riverfront developments, this has not affected the river's hydrology."

Lily pools, herbal and cosmetic gardens, food kiosks, an amphitheatre, a promenade, amusement rides and a children's park adorn the park.An added attraction is access to the Silver Jet Jetty and Fairlie Jetty for those who fancy a boat ride. In addition, kmda organises festivals, with musicians and actors performing at the amphitheatre.

"We are a family of three and visit the park every Sunday. Though the Hooghly is not as uncontaminated as we would wish, it deserves a riverfront," says Siddhartha Mukherjee. There are roughly 9 million people like him, tourists and locals, who have visited it till now. "The park receives around 1.25 million people annually," says De.

Originally the park was maintained by kmda. However, in 2001 it hired S B Ex-Servicemen's and Youth Security Guards Welfare Association on a three-year contract. In June 2004, kmda extended it for another five years, covering the third section of the park. In addition to miscellaneous revenues, kmda earns a fixed share of Rs 30.5 lakh per annum of which it spends approximately Rs 20 lakh on overheads. The operator makes a profit as well.
The flip side of this success is the state of the Hooghly. While dissolved oxygen levels, measured in July 2007 by the National River Conservation Directorate, remain suitable for bathing at all monitoring stations (>4 mg/l), the total coliform count, according to the state pollution control board's annual reports, 2001-06, has been rising. While the average levels in 2001-02 were mostly within levels suitable for bathing (500 most probable number/100 ml), the 2005-06 average escalated to 423,125 mpn/100ml at the Howrah monitoring station. "This is the closest sampling point to the millennium park," says Tapash Gupta, scientist, West Bengal Pollution Control Board.

"Undoubtedly coliform levels have escalated, since the Ganga Action Plan-i did not tackle the problem," says Ashim Nag, executive engineer, kmda. "This has been incorporated in the second phase, however." Twenty-five sewage treatment plants (stps) have been installed in West Bengal under phase-ii to maintain water quality.

While kmda officials say this capacity is insufficient, stps are hardly the solution. There are two outside the Kolkata municipality, receiving waste from the city. But both the Bangur and Garden Reach stps are underutilised due to a lack of household connections in their catchments. According to a 2006 Asian Development Bank document, only 17 per cent of the population in these areas has sewer connections.

"There are nine stormwater outfalls controlled by gates discharging into the river from the Kolkata Municipal Council area during the monsoon," says Amit Roy, deputy engineer (drainage), kmc. "These are opened during low tide." But as in most cities, these outlets for rainwater now carry sewage and could impact water quality. One of the outfalls is located between the Silver Jet Jetty and Fairlie Jetty stretch of the park.

But sewage is not a problem, since the Hooghly is not a natural drainage outlet for the city area--its banks being higher than the drainage basin. The city slopes from west to east, away from the Hooghly. The river has another hydrological feature, which, according to experts, keeps pollution levels in check. "The effects of the outfalls are reduced due to the Hooghly tidal bore, through which the incoming tide of water travels up the river against the direction of the current," says Gupta. The volume of water dilutes the dirt.

For now, a stroll in the park is pleasant. But the river's health must be pro-actively looked after.