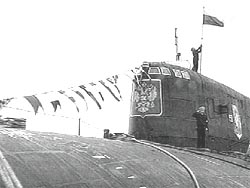 the Russian government has decided to recover the sunk Kursk submarine. The decision has ben taken due to the possibility of a nuclear leak from the wreck's reactor. The Kursk, an attack submarine was shattered by an explosion while taking part in naval exercises in the Barrents Sea off Russia's north coast. Two nuclear reactor units are installed in it.

"If a crack develops or the reactors get damaged in any other way, then it will pose a potential danger in just a few weeks," says Alexander Nikitin who is a former Russian navy nuclear engineer. "The Kursk is a ticking environmental time bomb," says Greenpeace, an environmental pressure group.