Lab on a chip 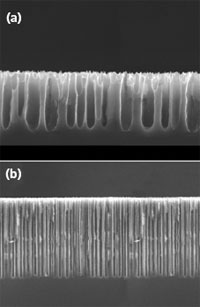 IMAGINE a microchip that harbours an array of test tubes and beakers. Researchers from Bengal Engineering and Science University and Calcutta University have turned this into reality. With the aim of replacing large diagnostic tools, the scientists have created a silicon microchip etched with pores, shaped like tiny test tubes and beakers. They are studded with magnetic nanoparticles that can trap and sense biomolecules and can be used to detect pathogens that cause diseases.

Studies have shown that a compound of silicon, silicon hydride, with surface pores absorbs and emit light. But with surface pores greater than 50 nm, the silicon material stops emitting light. The scientists exploited this optical property to make the device. The property of such a material changes as soon as molecules from biological and non-biological samples, like inorganic compounds, bind to its surface.

To design porous silicon, the researchers etched silicon wafers in hydrofluoric acid and dimethylformamide solution. The wafers were further exposed to electric flow with varying resistances to obtain pores of various shapes and sizes. For the micro test tubes, the pore and the inter-pore distance is typically one micrometer (one-millionth of a metre); for a micro beaker the pore size exceeds 1.5 micrometre and the inter-pore distance is below 100 nanometers (10-millionth of a metre).

They then separately synthesised superparamagnetic iron oxide nanoparticles (SPIONs). The porous silicon template was dipped in SPIONs solution. Under the guidance of magnetic field, the scientists attached SPIONs to the surface and inner walls of the pores.

“Attaching SPIONs to pores has special advantage,” says lead researcher Mallar Ray, adding, “Studies have shown the potential of nanoparticles as non-invasive molecular probes to monitor biological processes like molecular changes inside tissues and cells.” Since both silicon and SPIONs are biocompatible, we can envision a microchip that can be inserted inside a living being to carry out sensing at a specific location, adds Ray. Attempts are on to load SPIONs in test tubes and microbeakers along with designed sequences of DNA for specific biological applications. The study is published in the October issue of Nanoscale Research Letters.