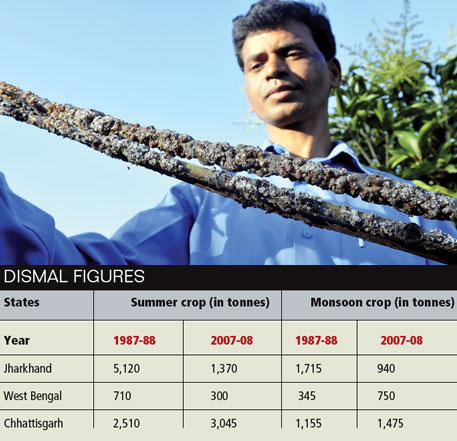 INDIA is the biggest lac producer in the world. Most of it comes from plantations in Jharkhand, West Bengal and Chhattisgarh. The resin, secreted by female lac bugs, finds extensive use in pharmaceutical, dye, cosmetics and food industry. However, lac production has been declining steadily over the past few years. Scientists would cite shrinking forest cover and poor farming practices as the reason. But a study has now shown that another, far more perilous, factor might be at play: climate change.

The research done by a team of scientists from Ranchi-based Indian Institute of Natural Resins and Gums (IINRG) has linked dwindling lac production in Jharkhand and West Bengal with changing temperature and rainfall patterns. The researchers contend that these changes affect the sexual behaviour and mortality rate of lac bugs, which in turn hits lac production. They have published their findings earlier and presented their work at the National Symposium to Combat Emerging Pests in The Current Scenario of Climate Change in 2009. In their ongoing study, Lac Insects: Impact of Climate Change, the researchers are probing impact of climate change on lac bugs further.

In India there are two crops of lac in a year, one in summer and second one during monsoon. The study shows that summer crop production has been severely affected in the past two decades. For the study, the researchers, led by the director of the institute R Ramani, have analysed daily temperature and rainfall data from 1984-2012. They found that pre-winter and summer months are steadily becoming much warmer and post-winter months much colder than what they used to be 29 years back—maximum temperatures for August have increased by up to 1.7°C and minimum temperatures have decreased by 0.5°C.

The scientists say change in temperature during rainy months of August and September is crucial as these months coincide with the pre-sexual and sexual maturity of lac insects. Ramani says increase in temperature leads to high mortality rate in lac insects. “It may be because of lac worms falling prey to pathogens or parasites,” he says.

Ramani also points out that high temperature disturbs gender ratio among lac bugs. “Studies have shown that population of males increases dramatically because of high temperature,” he says. Since, it’s only the females that secrete lac, decrease in their number has a detrimental effect on lac production.

Very high or very low rain spells during winter months also affect lac production negatively. During 1988-89 a poor rainfall of 2.6 mm during winter months led to 26.7 per cent drop in lac production and a high rainfall of 304 mm in 1997-98 reduced production by 57.39 per cent. Over the past three decades, rainfall patterns have changed drastically. While January to June witness increasing daily average rainfall, July to December have a decreasing trend. Ramani claims that because of such variations, there are changes in the production of rangeeni variety of lac. Since 2007 there has been a steep decline in its production.

In a bid to arrest the dwindling production of lac, scientists have zeroed-in on a new host plant, Semilata. It grows faster and reduces tree-based farming, thus boosting lac production. Ramani says providing a solution to climate change is impossible for his small research institute. All they could do to check dwindling lac production is provide the alternate host plant.

Forests in a changing climate : will forests role in regulating the global climate be hindered by climate change?