a Rs 550-crore Hero Honda plant in Nalagarh in Himachal Pradesh, proposed in June 2006, was considered the driver of industrial expansion in the state. The project was granted initial permission by the state at a single window clearance authority meeting and Rs 19,000 crore had already been mobilised for the task.

But disputes over classification of land soon brought the project to a halt.

Himachal's land classification system has always been a problem area. Sixty-seven per cent of the total area is held by the forest department. The rest is mostly private land and a minuscule proportion, about 0.5 per cent, is revenue land. The dispute over land became intense between the forest and revenue departments after the Forest Conservation Act (fca), 1980, came into force.

The act says that any diversion of forestland requires the Centre's approval. "Obviously, the state is not very pleased. Despite being the owners of land, it is mandatory for the state to not only seek the Centre's permission for even small projects, but also pay the net present value (npv) for diverting forestland," says R A Singh, principal chief conservator of forests, Himachal Pradesh.

The present crisis is the result of a number of notifications regarding land and settlement processes. The most important are the 1896, 1897 and 1952 central notifications under which large areas of government wasteland were declared protected forest, but without proper demarcations. The 1952 notification gave "all forest land or waste land in Himachal Pradesh which are the property of government" to the forest department for protection.

The state has, in the last decade, churned out numerous orders trying to denotify various kinds of land, making the classifications murkier. "It is difficult to say whether much of Himachal's area consists forest or revenue land. This is ridiculous as in any change of land use, we end up with a dispute," says Sushil Kapta, deputy advisor, Himachal Pradesh Forest Sector Reforms Project.

Not surprisingly, the categorisation of the land earmarked for Hero Honda is ambiguous. Rajesh Kumar, deputy commissioner of Solan, says that according to revenue records, the 1,500 bighas with 50,000 trees -- mostly sheesham and eucalyptus -- in Bir Plasi in Nalagarh are classified as banjar qadim (fallow but cultivable land), and is owned by the state but possessed by the forest department, meaning, forest department controls it. But before being transferred to Himachal from Punjab in 1966, it was notified as demarcated protected forest under the Patiala Forest Act, 1960.

Besides, the Supreme Court in 1996 had clarified the true scope of the fca by ruling that "the term 'forest land' will include any area recorded as forest in any government record irrespective of the ownership".

Therefore, the Bir Plasi forest attracts provisions of the fca as well as the npv charges. But the district administration, taking advantage of ambiguities, gave its approval for land transfer. The case got even more complicated with the mysterious death of the Nalagarh divisional forest officer -- a number of inquiries have been ordered into the matter.

Although the state has tried to slot portions of wastelands as revenue land to counter the ramifications of the 1952 notification, all efforts have been unsuccessful because of the fca.

For example, the state issued two notifications on August 24 and December 5, 1998, clarifying that government waste land classed as "gair mumkin, charagah bila drakhtan and nakabil charan" shall not be treated as wasteland and, therefore, not fall under the 1952 notifications, or the fca.

But the central government objected and made it clear that no state government is permitted to change any entry relevant to forest land without taking its approval. It also issued a notice to the state asking it to withdraw notifications and warned that none of the state's proposals would be approved till then. The notifications were thus withdrawn on September 9, 2003.

The state is obviously frustrated. The only major chunk of land it has is those under the Abolition of Big Landed Estates Act 1971 and the Village Common Lands Vesting Act 1974. "Even that is about 0.5 per cent of the total land in Himachal Pradesh . Much of this also had been allotted to the landless for agriculture," said R K Sood, project director, Himachal Pradesh Forest Sector Reforms Project. Fifty per cent of this land was retained for grazing. According to these acts, non-allotable land was to be turned over to the forest division but even that was stalled because of fca.

"The forest division in Himachal is seen as the biggest landlord but it is by default. And it brings problems and conflicts all the time. When there is illicit felling the forest division is incriminated by district administration but when they want to divert it, like the Hero Honda case, they call it revenue land," says Kapta. "We just want clarification on the status of land in the state, be it forest or revenue."


To find a way out of the maze of limiting legislations, the Supreme Court constituted a committee in 2004 to examine the implications of the 1952 notification, which has come out with a report. According to the report, the 1952 order applies only till survey, settlement and notification of the forest area is completed and it would be redundant once settlement operations were completed and forest areas demarcated. But residual land other than those notified as protected forest and reserved forests, including wasteland, are still characterised as protected forest.

"The point was to speed up the settlement process. But even after completing settlement, most land still remains classified as protected forests and now the state practically has no land to even discharge welfare activities," said K C Sharma, a committee member. 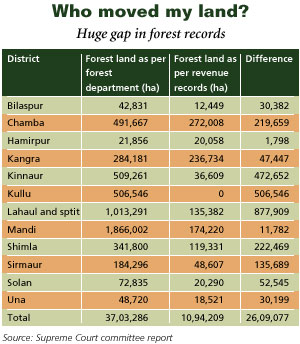 The report also adds that there is a dispute over the classification of about 2.6 million hectares (ha) of land, depending on whether one looks at revenue or forest records. This 2.6 million ha is the difference in forest land data by the forest department and revenue department (see table: Who moved my land?). Therefore, that is the amount of land that the state should receive after settlement of rights.


Committee members say that the 1952 notification was issued to check illicit felling of trees, which were not part of reserved or protected forests. Therefore, it was valid till the survey and settlements were completed and extent of rights of the state government on the remaining land clarified.

However, neither the requisite action of notifying areas was done after the 1952 order, nor areas from forest land excluded, due to the lackadaisical approach of the government. And now, it is too late because the fca is in place. The committee also recommended that after due inquiry, necessary settled areas be demarcated as forest land and the rest left at the disposal of the state to meet its requirements. "When everything has been done, even settlements in most districts, then wasteland that doesn't qualify as forests should be given to the state," says Sharma.

Members also recommended that the Indian Forest Act should be amended to include a definition of wasteland. Despite the committee's recommendations, nothing happened, and a sub-committee is in place to go ahead with the implementation.

The peculiar situation in the state is a breeding ground for uncertainty and constant disputes between the revenue and the forest departments. They have failed to update revenue records post settlement, and in some areas, even to complete settlements.

There is also no state land use policy, which should ideally act in tandem with forest policy. Coupled with the provisions of the fca, applicable on almost all land, the situation can only worsen.