Cities are expanding indiscriminately across the globe, at the cost of rich biodiversity 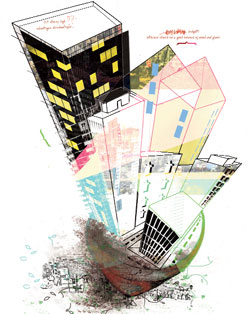 IT IS common knowledge that cities are expanding. That they are eating into the rich biodiversity is also well known. What is disturbing is the pace of this irreversible global phenomenon.

Between 1970 and 2000, expansion has been an astounding 58,000 sq km. Almost half of this has been at the cost of biodiversity. At this rate, by 2030 urban land area would be at least 430,000 sq km, almost the size of Iraq. Indiscriminate expansion could lead to urbanised land area reaching 12,568,000 sq km. This was found by a team of researchers led by Karen Seto of Yale School of Forestry and Environmental Studies in the US. They analysed 326 studies across the globe to map land conversions in the past three decades.

Till date, urbanisation was studied using population as the indicator. This study, published in PLoS One in August, quantifies its rate besides magnitude. It used remote sensing technique to understand land use. The rate of expansion, it says, has been the highest in India, China and Africa. Over the three decades, North America has witnessed maximum urbanisation.

Increase in population and per capita Gross Domestic Product (GDP) could be among the reasons behind this. “Annual growth in GDP per capita drives about half of the observed urban land expansion in China. It moderately affects urbanisation in India and Africa where expansion is driven more by urban population growth,” the study states. In high-income countries, the rate of expansion is slower related to GDP growth. Conversely, in North America population growth is the prime cause of urban expansion.

Worldwide, urban expansion has been one of the primary drivers of habitat loss, the study states. Forty-seven per cent of the urbanised area is within 10 km of terrestrial protected area listed by the International Union for Conservation of Nature. “This will challenge conservation strategies,” it says.

Researchers found expansion prominent in low-elevated coastal zones—10 m above the sea level. About 34 per cent of the areas studied fall within 10 m of such zones. Urbanisation close to coastal zones may considerably harm humanity in the form of storm surges and rise in sea levels.

The study is the first of its kind in suggesting the reasons of global expansion. It says that urban expansion is related to a variety of factors including international capital flows, the informal economy and land use policy. However, the study did not account for all the major cities in the world. Five of the most populous cities—Dhaka, Karachi, Kolkata, Jakarta and Delhi—were not studied.

Delhi’s urban area expansion was recently studied by the Jamia Millia Islamia University. It confirmed land coversions were posing a serious threat to biodiversity. Residential area in Delhi has almost doubled from 1994 to 2004.

Researchers used remote sensing satellite imaging and geographic information system and found a steady increase in urban land area. “Of the total 148,375 ha in 1992, agricultural land constituted 65,114 ha. This declined by 12 per cent to 54,153 ha in 2004,” the study states.

At an average, 664 people migrate from rural areas to Delhi every day. This huge influx has led to the expansion, says Atiqur Rahman, lead researcher of the study who teaches geography at the university.

Urbanistion at the expense of biodiversity is triggering changes in climate, land cover patterns and hydrological systems. “Delhi has seen a change in the urban ecosystem. Fertile land has been converted to impervious planes, while underground water table has receded,” says Rahman.

The process is similarly significant in the biodiversity-rich Bengaluru. One of the fastest growing cities in the world, its urban land area has almost doubled in the last decade, from 740 sq km in 2001 to 1,306 sq km now.