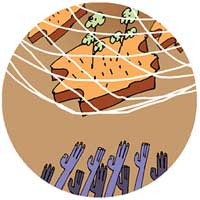 Tribals of Koraput district in Orissa have often been cheated of their land by reform movements or by cashew plantations because no one ever explained to them their land rights. Quaterly Ama Jami, meaning 'our land', was recently launched to do exactly that. With information on legislation like the forest rights act and government schemes like Mo Jami Mo Dih--aimed at ensuring possession of the distributed ceiling surplus and homestead land--the Oriya magazine is a helpful resource for tribals. The majority of them living in forests and hills of Koraput, one of India's three poorest districts, are either landless or possess very little land.

Brought out by Koraput-based non-profit Society for Promotion of Rural Education and Development, Ama Jami also aims at mobilizing public opinion on land issues. The editorial in its December issue highlights the plight of tribals and harijans who in the 1950s and 1960s were persuaded by the leaders of the Bhoodan movement to donate the little land they had. The movement was meant for redistributing land among the landless but much of this land remains undistributed.