After finding high levels of dioxin-related compounds in breast milk of women living near landfills, a Vadodara-based non-governmental organisation intends to file a public interest litigation (PIL) against the Gujarat Pollution Control Board and the Vadodara Municipal Corporation 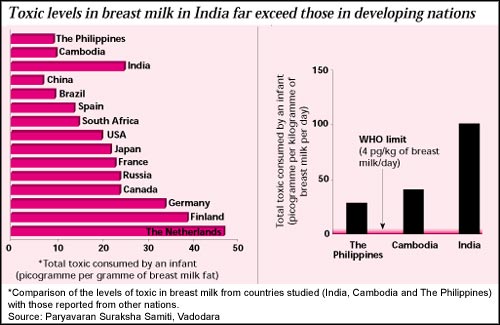 after finding high levels of dioxin-related compounds in breast milk of women living near landfills, a Vadodara-based non-governmental organisation intends to file a public interest litigation (pil) against the Gujarat Pollution Control Board and the Vadodara Municipal Corporation (vmc). Paryavaran Suraksha Samiti (pss), the ngo, alleges that people's health is being affected in most parts of Gujarat due to the toxic emissions of landfills, illegally constructed by vmc in residential areas. A research, conducted by the us-based Texas a & m University, shows that emissions of municipal landfills contain more than 113 toxic chemicals that easily accumulate in the human body.

The pss researchers compared breast milk samples from India with those from Cambodia and the Philippines. The samples were tested for the presence of three toxic compounds -- polychlorinated dibenzo-p-dioxins, dibenzofurans and biphenyls. All the samples were found to contain the three toxic substances in varying degrees. The highest levels of toxic equivalencies (teqs or total amount of toxics) were found in the samples from India, followed by Cambodia and the Philippines. "The levels found are high enough to cause neurological damage," says Rajnish Tiwari, a Vadodara-based physician.

An infant's daily intake (di) of teqs via the milk was also calculated, based on the assumption that the child ingests 700 millilitres of milk per day, and he/she weighs five kilogrammes. The di was found to far exceed the total daily intake (tdi) of harmful substances proposed by the World Health Organization (who) (see graph: Toxic levels...). The who limit is four picogrammes of teqs per kilogramme of food consumed everyday.

Despite the situation being so grave, the authorities refuse to take any corrective measures. "We recently visited an illegal municipal landfill and saw that not only is the waste being dumped without segregation, but it is also burnt throughout the day," says Rohit Prajapati, an activist of pss. Since the organisation's plea to discontinue the use of the landfills has been ignored for long by vmc, it decided to file the pil.