Come 2004, 90 per cent of landfills will be shut down in the UK. The step is being taken in the wake of a recent EU directive that has clamped down on landfills in all its member states 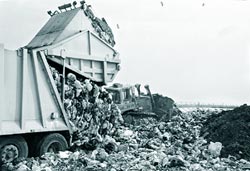 come 2004, 90 per cent of landfills will be shut down in the uk. The step is being taken in the wake of a recent eu directive that has clamped down on landfills in all its member states. "It stipulates that all landfills are to be classified as inert, hazardous and non-hazardous. There will be no co-disposal of hazardous and non-hazardous waste after July 2004. And all hazardous waste will be pre-treated before landfilling," says Tammy Wilson, press officer-environment and plant health, in the uk's Department For Environment, Food And Rural Affairs (defra).

According to Carolyn Nesbitt, also of defra, most of the landfills in the uk would be filled up and sealed off by 2004. It is estimated that England and Wales alone produce about five million tonnes of hazardous waste per annum. As many as 159 out of 173 active landfills would be closed down in England, and 37 out of 39 landfills sealed in the Anglian region by 2004. There will be no landfills in Thames and Wales.

The main aim of the recent directive is to divert waste from landfills and to dispose of it safely. But experts are apprehensive that the closure of landfills might leave these countries with no option for waste disposal. The uk government allays such fears. "The government will first reduce the amount of waste being generated, and then manage the waste produced by re-using, recycling and composting it," explains Wilson.