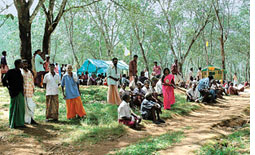 uncertainty continues in Chengara village in south Kerala's Pathanamthitta district where about 10,000 landless people forcibly settled in a rubber plantation in August 2007. The settlers, mostly dalits and tribal people, say that the government's indifference to their repeated demands for land triggered the current struggle.

"Land to landless adivasis and dalits has been a long-standing promise of governments. But successive governments have betrayed us in the past four decades," says Laha Gopalan, leader of the organization Sadhujana Vimochana Samyuktha Vedi (sjvsv) under which the people occupied the land.

The agitators demand a compensation of 2 hectares and Rs 50,000 for each family. They say the company running the plantation too holds encroached land and the lease of the estate has expired. "If plantation companies can encroach on government land and reap huge profits from it, why not the poor be given five acres?" asks C R Prakash of sjvsv. They allege that more than 30 plantations of the company Harrison Malayalam in six districts have encroached upon government land. The company refutes the charges. "We have proper land documents," says V Venugopal, its chief legal manager. He blames the government for the crisis.

In August 2007, the company moved the Kerala high court, which on November 30, 2007 directed the government to peacefully evict the encroachers within three months. "But the government has done nothing, except arresting a few," says Venugopal. The families have been resisting the government efforts to forcefully evict them. "We are labelled as Maoists, and the police book us on false charges," says a protester. Harrison is not the only company alleged to have encroached on public land. There are many others. But the government has ignored the contraventions. "Documents are not available even under the Right to Information Act," says Tony Thomas of the ngo One Earth One Life.

Situation in the settlements has worsened. The families have no means for sufficient food, water, power or healthcare. "Since we are outsiders, it's difficult for us to find jobs here. We are also denied jobs back home since we have joined the struggle," says Babu, one of the agitators from the nearby Kollam district.

The Chengara struggle comes at the fourth anniversary of the Muthanga struggle where the police fired at agitating tribal people who moved into a wildlife sanctuary in Wayanad district. "Let them kill us if they want. But we need land for our survival," says T Saraswathi, general secretary of sjvsv.