Mountain slopes in a seismically active zone, weakened by human interference, collapse following rainfall to claim more than 300 lives in the Himalaya 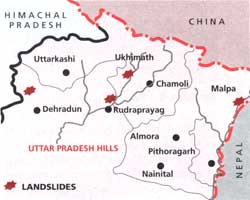 TAMPERING with the fragile ecosystem of the Himalayan region has once again triggered off a disaster in the hills of Uttar Pradesh (UP). Tragedy struck Malpa, a tiny village in the Pithoragarh district, near the Indo-China border on August 18. A five metre high avalanche of rock and water wiped out the settle-ment killing about 180 people, includ-ing 60 Kailash Mansarovar pilgrims - most of them in their sleep. Similar landslides also occurred at Rudra-prayag, Ukhimath and Dehradun dis-trict in Uttar Pradesh. About 300 people have been killed so far and many more are reported missing.

Scientists and social activists work-ing in the hills of UP say that the land-slides were due to human interference. Dinesh [oshi of Himalayan Study Centre, Pithoragarh, says: "Road con-struction and frequent blasting have spelled doom for the fragile region in this district." After the Indo-China war in 1962, there has been feverish road construction in the area, without any proper planning - which is still going on. R B Singh, a professor of geography, University of Delhi, who has done a study on the environmental disasters in the Yamuna catchment in the Himalaya said: "Construction of roads means that these fragile areas are opened to human contact. Blasting large obstructive rocks with dynamite and the resultant rock debris not only work to destabilise the slopes, but also release residual stress on the slopes". Joshi warns of bigger calamities, if human interference such as road construction continues.

Landslides are a part of the Himalaya environment because the slopes are weak and are made up of friable rocks. If the slopes were thickly forested, a major landslide would occur once in 20 to 30 years. With deforesta-tion becoming the order of the day, minor landslides are occur-ring with ever increasing fre-quency. In 1984, a study con-ducted in the Himalaya revealed that more landslides took place in the deforested area than in the forested areas. The study found that 148 landslides took place on slopes where the tree cover was less than 40 per cent and 118 landslides took place where the tree cover was more than 60 per cent. Seismic move-ments are constantly taking place in the region. On an average about 200 earth-quakes of smaller magnitude occur every year in the hills of UP.

Going by the geological clock, the Himalaya is a "young" mountain range, and is prone to natural disasters. Experts also say that they are one of the most ero-sion-prone ranges. Intense rainstorms and earthquakes make these mountains prone to frequent landslides. But it is intense rainfall that usually triggers landslides (see box: Sliding mountains).

Prolonged downpour often reactivates old landslides. "The natural absence of vegetation in the higher reaches of the catch-ment areas also contributes to frequent landslides," says an expert. Apart from bringing down large quantities of sedi-ments, landslides become a major cause for devastating floods because they block the narrow gorges. They are nor-mally marked by a sudden change in the gradient of a trib-utary stream, constriction at the point of confluence and weak geological conditions in the catchment of the tributary. The formation of landslide dams is a common sight in the Himalaya.

Large scale deforestation and faulty farming practices have also led to soil erosion, according to local people. Says V Sharma, department of geology, Delhi University; "It is not for the first time that these landslides arc occurring. This time it has attracted attention due to the large scale of deaths and destruction". "Human activities need to be controlled since the region is prone to earthquakes. The government must plan develop-ment activities to check landslides," he adds. Ironically, the debris generated is thrown down the slopes, which in turn devours vegetation and even fields. Experts say that about 40,000 to 80,000 cubic metre of debris have to be removed to construct a road I km long. Moreover, 550 cubic metre of debris have to be removed every year to main-tain the road.

The increase in human activities along the slopes has changed the exist-ing land use pattern. Experts say that the change in the cultivation patterns is another factor for landslides. A large number of people have shifted to terrace farming. Terrace farming requires vast tracts of denuded land - and also lot of water. The crop pattern has also changed. Villagers now fall prey to the less soil-binding crops such as rice instead of millets, more suited to this area. Local crops like millets and maize have taken a back seat while commercial crops and water intensive crops like paddy are grown.This makes the hills unstable. Earlier, forests would have protected the strength of the soil, but due to excessive deforestation, the protective cover has been drastically reduced. This has resulted in the creation of large number of rivulets in the hilly region.