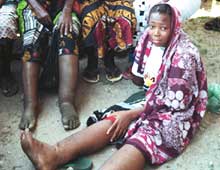 Over 90 per cent of Tanzania's population (over 30 million people) is threatened by an elephantiasis (lymphatic filaria) epidemic. On May 23, 2005, Tanzania's assistant minister for health Hussein Mwinyi said the danger was "great"; "the situation could get worse if the trend is left unchecked". The National Institute for Medical Research, Tanzania, which recently surveyed around 100 districts, attributes the high rate of the disease to mosquito infestation and people's migration.

Elephantiasis is the second largest cause of disability in the world. Symptoms include enlarged arms, legs, genitalia, and breasts. It is endemic in 80 countries. The World Health Organisation estimates its burden (in disability-adjusted life years) as the second highest of all tropical diseases, after malaria. Tanzania has undertaken a National Lymphatic Filariasis Elimination Programme since 1998, aiming to eliminate the disease by 2015 at an estimated cost of us $20 million.