World’s largest particle collider that was first started up on September 10, 2008 was shut down for maintenance in 2013 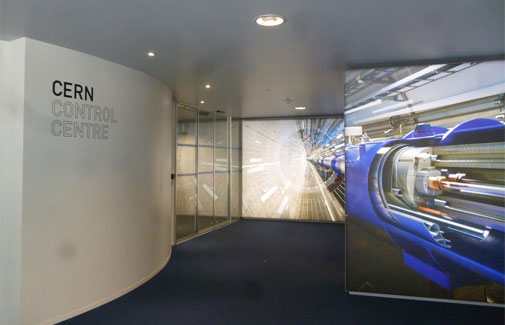 CERN’s Large Hadron Collider (LHC) whose second phase was to begin on Wednesday after a pause of more than two years was stalled for some time. The experiment that was first stared at 7am was restarted again at 9:33 am. The experiment was halted temporarily because “the particle beam was lost due to timings problems” said Frederic Bordry, director at European Organization for Nuclear Research (CERN). The problem was caused by a software glitch.

“LHC Season 2: New frontiers in Physics” is the second phase of CERN’s experiment to find the “dark matter” that will complete the Standard model of particle physics.

After restarting the experiment at 6500 GeV, LHC operators declared stable beams at 10:40 am Swiss time. This is the start of a new adventure! We have beam back! This is a great achievement and a great start!" said CERN's Director for Accelerators and Technology Frédérick Bordry.

The cause of this glitch was attributed to a software problem which tripped the subsystem, added Bordry while speaking during the webcast of the experiment.

The first bunch of protons was injected at 8:13 am (Swiss time) in LHC, at the energy of 450 GeV. After injecting three bunches of protons successfully, ramping-increasing the energy was started and was supposed to take 20 minutes to reach 6.5 TeV. This is the set energy required to start preparing for collision of beams in this phase, after which the energy will be increased to 13 TeV (one TeV=1.6 x 10-7 Joules) by evening and will be maintained for the next three years.

But due to loss of beams during the initial phase of ramping, the experiment started the ramping process again. “The major target for this phase is to develop stable beams at 13 TeV”, said Federico Alessico, spokesperson, LHCb (Large Hadron Collider beauty experiment specialises in investigating the slight differences between matter and antimatter by studying a type of particle called the "beauty quark", or "b quark"). These 13TeV energy levels have earlier been achieved in the independent experiments in the last two years but the major task this time is to gain a stable beam production level, he added.

The stable beams of 13 TeV were achieved in the second attempt at 11:20 am Swiss time. This energy is almost double the collision energy of its first run of experiments in 2010. The scientific investigation on particle physics will be continued at this energy round clock for next three years, said Director Bordry.

David Charlton, spokesperson with Atlas Experiment (ATLAS is searching for new discoveries in the head-on collisions of protons of extraordinarily high energy) mentioned that a new “pixel layer” has been added in the last 27 months that allows the system to go closer to interaction of beams. This will result in a better feed, he added, during the live webcast of CERN’s New frontiers in Physics.

The programme, called New Frontiers in Physics, was started after 27 months of repairing and updating the data acquisition system, detectors and other important parts of experiment to search the “dark matter”, which will complete Standard model of Physics known as supersymmetry or SUSY. In the Phase 1 of experiment in 2010, Higgs boson particle was invented, for which Nobel Prize was given to François Englert and Peter W Higgs.

Further, the experiment is trying to find the matter which constitutes 95.1 per cent of total mass energy. ‘The beams will be moved at a much faster rate this year to find that “secret particle”, which could be found as in earlier experiments, other smaller particles have already been identified, said Tiziano Comporesi, CMS, spokesperson during the live webcast of experiment. CMS is Compact Muon Solenoid is a general-purpose detector at the LHC which uses different technical solutions and a different magnet-system design to study the objectives of ATLAS experiment.