from April to August this year, almost 300 children fell prey to malnutrition in just two blocks (Akkalkua and Taloda) of Maharashtra's Nandurbar district 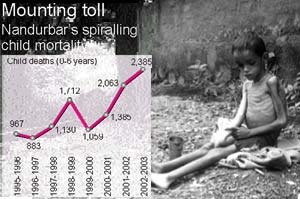 from April to August this year, almost 300 children fell prey to malnutrition in just two blocks (Akkalkua and Taloda) of Maharashtra's Nandurbar district. The nightmare has been recurring in the entire region since 1995, with the death toll crossing 12,000. Although even studies commissioned by the authorities identify malnourishment as the main culprit, the state government refuses to acknowledge the problem.

The reason for this is not far to seek. Among the prime causes of malnutrition in the area are degradation of forests, deficient healthcare, unemployment, landlessness of local people and a defective public distribution system. And all these ills can be ascribed to rampant maladministration.

"We suspect that in at least 60 per cent cases (470 children had died in Akkalkua and Taloda in the five-month span), death was malnutrition related," observes Pratibha Shinde of Punarvasan Sangharsh Samiti, a tribal welfare body. The district health officer declined to comment on the issue. But a report brought out by the state government-run Tribal Research and Training Institute ( trti ), Pune, notes that last year over 75 per cent of child deaths in Nasik were malnutrition related. In Nandurbar, which comes under Nasik division, more than 2,385 children died between April 2002 and March 2003 (see graph: Mounting toll ).

"Malnourishment is a result of a host of factors," stresses Shinde, adding: "These have not been dealt with because though crores are spent in the name of tribal development, only a fraction of the amount reaches the beneficiaries."

widespread graft: The problem is endemic in the region and permeates every sphere of activity. Not only is the fact highlighted in official reports, a minister, too, accepts it. "The allegations of rampant corruption in the district are true. Employment schemes are not functioning well, doctors hardly visit health centres and people in resettlement villages are landless. All in all, the situation is bad," concedes R R Patil, the state's rural development minister. Yet he attributes malnutrition in the area to early marriages and a high birth rate.

Local officials, meanwhile, claim that all is well on the administrative front. "Most of the schemes are in place and corruption is not an issue," asserts district collector Sanjay Khandare. His claims fly in the face of a November 2002 trti report that documents siphoning of Rs 9 lakh meant for a watershed development programme.

out of work: In 1972, the Employment Guarantee Scheme ( egs ) was launched by the state government to combat famines. It was conceived to create productive works like tanks and other irrigation structures, and envisaged regeneration of forests. Sadly, the focus of the scheme has now shifted to constructing roads and buildings.

"We are rarely provided employment opportunities," laments Indira from Dabh, a tribal hamlet in the district. "The government says there are no takers for egs . The fact is local people aren't even aware they have to approach the collector for work," points out Arun Bhatia, ex-commissioner, trti .

basic needs not met : "Beneficiaries hardly get any food from the anganwadi (mother and child care centre) in my village," says a primary health centre ( phc ) doctor in Dadgaon village. Shinde concurs and adds: "In some places, up to 150 children, scattered in hamlets at least a kilometre away from each other, are covered by one anganwadi ." Despite this Khandare maintains that the cause of child deaths is not lack of food. "Rather, tribal families need to be taught how to take care of children," he says.

Shinde draws attention to a major problem: "Land records have yet to be settled. As a result, tribals are routinely harassed by the forest department." Kakarya Surjiya of Narmadanagar village, whose grandchild died of malnutrition, is bitter: "There wasn't enough food since we don't have enough land."

severe disorder: Nandurbar's healthcare system is in a shambles. "It is difficult to provide medical facilities in remote places like Akrani and Dadgaon," admits a senior government official. "My niece would have been alive today had she received timely treatment," says Kirta of Narmadanagar. The girl, who was not even five years old, died a few weeks ago. The phc of the area has had no doctor for four months.