Latest report on climate change may turn tables in US 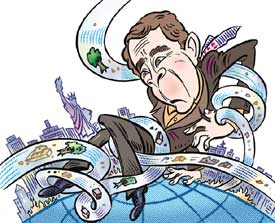 The us has perpetually been in denial about global warming, especially after the Earth Summit in Rio De Janerio held in 1992, but a recent report released by the us Climate Change Science Program (ccsp) may shake it out of its complacency. The report adds ammunition for lobbies within the us and forces outside it for pushing the world's only superpower towards signing the 1997 Kyoto Protocol on global warming. It does this by demystifying the debate over the contribution of human activity to climate change. While science has increasingly shown that climate change is induced by human action, industry and the us government have called scientific findings "hallucinations".br>


The ccsp report, published on May 2, 2006, claims to be one step ahead of earlier reports by the Intergovernmental Panel for Climate Change (ipcc) and the National Research Council (nrc). ipcc's third assessment report in 2001 had brought out that there was an increase in the overall average global temperature by 1 c since the late 1950s.

They showed a significant difference in the rise of global average temperatures in the lowest 8 km of the atmosphere (+0.05 0.10 c per decade) and the global average surface temperature (+0.15 0.05 c per decade). The difference in the rate of warming of the surface and the atmosphere was found to be statistically significant when compared with climate models. Climate models, on the other hand, showed that due to increased concentrations of greenhouse gases, temperatures increase in the lower atmosphere as well as on the surface. The ipcc report was criticised by many because it couldn't explain this anomaly. The 2001 nrc report on climate change was also criticised on the same grounds. Such debates led to a certain amount of confusion regarding the 'actual' reason for climate change. Reason enough for the us to stall efforts to curb greenhouse gas emissions.

The recent ccsp report, Temperature Trends in the Lower Atmosphere: Steps for Understanding and Reconciling Differences, has not only resolved previously reported discrepancies between the amount of warming near the earth's surface and the higher atmosphere, but also strengthened the link between rising temperatures and human induced greenhouse gases, thereby increasing our understanding of the causes behind the observed climate changes.

Energy expert John Holdren has noted that without change the world is headed for a considerable temperature increase, a scenario he calls the "roasted world".

The significance of this report is not restricted to scientific circles only. It has political implications as well, because the scientific establishment has now spoken out against state gagging and public awareness about the problem has been increasing. In the past, the us has been accused of manipulating reports and barring scientists from speaking about the harms of global warming in public.Scientists and researchers from leading institutes like the National Oceanic and Atmospheric Administration and the us Geological Survey have accused the administration of removing references to global warming from their reports, news releases and websites. The first such case came to light when James Hansen from nasa told his story about harassment at the hands of a political appointee for voicing dangers associated with global warming and calling 2005 the hottest year of the century.


Although the full impact of the ccsp report is yet to be felt, it will now be very difficult for the government to mute the issue further because of 'supposed' lack of scientific evidence. According to Daniel Lashof, deputy director, climate centre, Natural Resource Defense Council: "This report has strengthened the link between global warming and human activities, but it is not science, which is the real cause of inaction by the administration. Rather, it is the pressure from industries with high greenhouse gas emissions, which are blocking any federal action that might cut into their benefits and force them to change the way they do their businesses."

However, there was a whiff of political change felt in the air recently, when on May 24, the us Senate foreign relations committee voted in favour of the Lugar-Biden climate resolution, which calls for us's participation in international climate change agreements. The recent amendments in the resolution also recognised the findings of the ccsp report saying that this has strengthened the scientific evidence that human activity contributes significantly to rising global temperature. "This resolution sends a positive message to the rest of the world, and especially our allies and trading partners, that the us is serious about addressing climate change. We need to include India and China, and recognise that a one-size-fits-all approach is not workable," says Senator Richard G Lugar from Indiana.

Brenda Ekwurzel, a climate scientist at the Union of Concerned Scientists believes that this new report is going to be an important tool in the hands of policymakers, but "any concerted action will require public pressure and congressional support. Given evidence and how the debate on global warming has been progressing for the past couple of years, such an action is not far from reality".

There is already a significant local and state level action, with cities and states making commitments to reduce emissions


Former vice-president Al Gore has taken the debate to a new level by releasing a documentary about global warming in movie theatres across the us. Gore hopes to ignite a debate among ordinary Americans and get them to put political pressure on the Bush administration to engage in reducing emissions. Gore notes that global warming "is really not a political issue, as much as a moral issue" -- a sentiment that many religious leaders also share. They have called for action under a national religious partnership for the environment, saying global warming is a moral challenge and a threat to humanity.

Despite years of global discussion on human-induced global warming, it was only last year that the us Senate adopted a non-binding resolution finally acknowledging the scientific consensus on the relationship between increasing global temperature and rising carbon dioxide emissions.