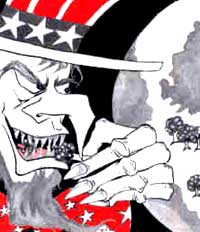 Latin American countries are planning to end the plunder of their genetic sources by the North. At present, Latin America has about 60 per cent of the world's plant species. Coloured cotton from Peru is about to be patented in the US, where it is already being produced and the rural people who maintained the species for centuries have seen no benefits. An Australian researcher on his way home from Maracaibo, Venezuela, stuffed a few samples of a weed growing along the landing strips into his pockets and the plant is now grown as summer for age for livestock in Australia.

"But if we want a new kind of grass to fatten up our livestock, we have to import the seeds and pay for the technological development of the species," said Antonio Leone, director of development at the Latin American Economic System (SELA).

SELA advocates a permanent forum for Latin America and the Caribbeans to facilitate consultation and coordination regarding the use of and access to genetic resources, an idea that authorities from throughout the region will discuss in Bogota, Colombia.

There will be a preparatory meeting for the fourth international technical conference on genetic resources, organised by the UN Food and Agriculture Organisation, to beheld in Leipzig, Germany. The Leipzig conference is to come up with a plan of action for research into the preservation and use of and access to biological resources. It will be a golden opportunity for Latin America to stress the weight of its biological wealth.

The Andean mountain range and the Amazon jungle are home to more than half of the world's species of flora and fauna. To date, some 438,000 species of plants of economic and social interest have been registered in the region. The Convention on Biodiversity signed during the 1992 Earth Summit in Rio de Janeiro, recognises natural sovereignty over biological resources while establishing the need for conservation.