Latin America in grip of chikungunya 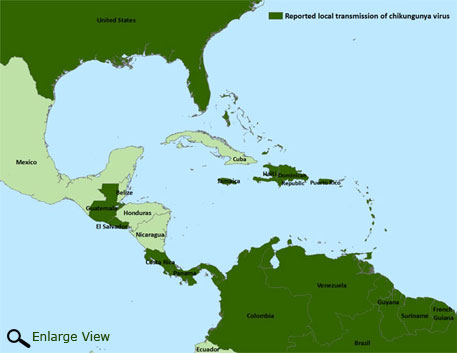 Chikungunya, a mosquito-borne viral disease that reached the Americas last year, is assuming epidemic proportions. It has moved from the Caribbean to the central and South American regions, infecting more than one million people.

The Dominican Republic is the most severely hit country, accounting for almost 50 per cent of all the cases reported, according to data available with Pan American Health Organization (PAHO), a specialised health agency that serves as the World Health Organization regional office for Latin America.

“As of September 19, 2014, local transmission had been identified in 34 countries or territories in the Caribbean, Central America, South America, or North America.  A total of 729,178 suspected and 10,845 laboratory-confirmed chikungunya cases had been reported from these areas,” says a report published on the website of US federal health agency Centres for Disease Control and Prevention.

The disease is transmitted by the bite of infected mosquitoes such as Aedes aegypti and Aedes albopictus. According to report published on the website of PAHO, the virus “can cause high fever, joint and muscle pain, and headache. Chikungunya does not often result in death, but the joint pain may last for months or years and may become a cause of chronic pain and disability.”

There is no specific treatment for the infection, or a preventive vaccine. As the disease is rarely fatal, number of deaths have been restricted to 113 in the region since the outbreak. People who recover from the disease usually develop resistance to it. But since the virus is new to the region, most of the population remains susceptible.