Latin American and Caribbean banana growers are seeking to reconcile the rivalry between them, which is threatening to escalate because of new import quotas set by the European Community 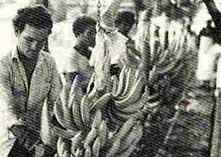 AN OFFER by Latin American banana growers for a dialogue has been eagerly accepted by their Caribbean rivals and discussions scheduled in St Lucia hopefully will dampen the dispute between them, triggered by banana import quotas fixed recently by the European Community (EC).

The cause of acrimony between the two groups is an EC ruling that restricts banana imports from Latin America to 2 million tonnes a year at a levy of L77.60 (Ecu 100) per tonne. Excess imports will increase the levy more than eight-fold. The remainder of EC's banana needs, approximately 1.5 million tonnes, is to be supplied without duty by Caribbean, African, and Pacific nations, considered traditional suppliers of the fruit to EC countries (Down To Earth, July 15, 1993).
The Latin Americans, who are more cost-efficient producers, wanted the EC to adopt an open market policy, but this was opposed by the rival producers, who argued that without protection their banana-based economies would be destroyed.

In appealing for reconciliation, Costa Rican President Rafael Calderon said, "We back preferences for Caribbean bananas, but we do not want the EC to lower the quantities now imported from Latin America." His statement has been welcomed by John Compton, Prime Minister of St Lucia, with the comment: "There is a glimmer of hope in the Costa Rican statement that a banana war could be avoided."

The latest EC import quotas have left Latin American nations with about 400,000 tonnes of bananas that they have been barred from shipping to the EC this year. "The new European regime means lower prices for bananas sold to the United States," Calderon said, pointing out if the banana surplus is exported to the US market, it would lessen the price of bananas already being sold there by Latin American growers.

Following the failure of Germany -- the world's biggest consumers of the fruit -- and the Benelux countries to have the European court overturn the new import regime, the Latin Americans now hope a General Agreement on Tariffs and Trade panel will declare the regime untenable.