The present unrest in Delhi has little to do with industrial pollution or loss of livelihoods. The way in which the government has chosen to act was bound to provoke anger

the issue of the closure and relocation of nearly one hundred thousand industrial units based in Delhi is assuming serious dimensions -- both political and administrative. On the face of it, it appears that the Supreme Court ( sc) notice to the Delhi government is responsible for the present turmoil. However, sometimes things are not as simple as they appear. Issues get twisted out of proportion or the real issues are swept under the carpet to keep the premises smelling sweet or to avoid having people point fingers. A case in point is the government's lack of reaction and initiative, because of which riots are breaking out in the national capital. 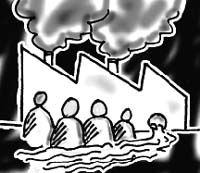 The media, the politicians, the labour unions and the common person have all tried to look at the unrest due to the move to relocate the industry from Delhi as a case of pollution caused by industry, which must be relocated, versus the livelihood of several thousand workers. Unfortunately, all this has nothing to do with pollution or livelihood. It is more a question of governance, or the lack of it.

This lack of governance has been all too visible for quite some time now. Whether it is a case for relocating industrial units or cleaning up the river Yamuna in Delhi, we always keep hearing and reading that action has to be taken and taken fast. But very little actually seems to get done. This appaling lack of concern, on the part of the government, is suddenly replaced with knee-jerk reactions to court notices and provokes public anger.

Even earlier when it came to dealing with air pollution in Delhi, it was left to the sc to steer the process to its natural conclusion. It was the sc that advanced and set deadlines literally setting a timetable for the executive to adhere to. Otherwise perhaps nothing would have happened. Here, automobile companies, that were finding it impossible to upgrade to better emission levels, did so immediately after the sc set deadlines for them as well. In fact, it advanced deadlines for Euro ii emission norms for passenger cars and the automobile industry met these happily.

The fallout of the closure of industrial units ordered by the Delhi chief secretary P S Bhatnagar, especially the way in which it was carried out, should have been foreseen. No wonder the city is under siege today. It is one thing to say that the Delhi government was implementing court orders, it is another thing that they were not implemented till the last minute and that too with haste and without consideration for the fact that they might provoke angry reactions. As a result, those affected by the sc order have brought traffic to a halt at various places, set buses and cars on fire, held protest marches and even roughed up officials who had gone to seal units.

Nobody is denying that there are serious problems. Lack of governance is not the only issue. There are clear problems in the small-scale sector units located in Delhi. For one, the small-scale sector is highly polluting and secondly, it is true the workers will be rendered jobless if the units are closed down. But all this should have been clearly thought through by the state government. It is not as if the government did not have time. But it did what most governments have done in India. It wasted precious four years.

A concerted plan of action should have been thought through before the government took action against the factory owners. Today it almost appears as if the government is acting under duress, doing something because the sc is forcing it to do so, not because it believes it has to do so. The state government has been clueless on how to go about this exercise. Moreover, despite the fact that the court has been monitoring the case for the last four to five years, no effort has been made by the Delhi government and the Municipal Corporation of Delhi to stop issuing licences to new units. Neither has an effort been made to properly ascertain the number of units in Delhi and expedite relocation. There is still confusion over the number of units to be relocated.