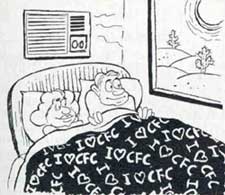 The international community may agree to do without chlorofluorocarbons (CFCs) -- the chemicals identified as being primarily responsible for the depletion of the earth's ozone shield -- but the state of Arizona is not about to be bullied into doing so. The state legislature has passed a law allowing the manufacture and use of CFCs, boldly defying the Montreal Protocol which calls for an end to CFC production, and to which the US is a signatory.

The law was passed after a colourful legisative process during which the Arizonian lawmakers argued that the link between CFCs and ozone depletion is a well planned out hoax, executed jointly by scientists trying to acquire "research dollars" and multinational chemical companies like the Dupont whose patent on CFCs is expiring soon. Besides, a "warm-climate" state like Arizona cannot function without airconditioners, which require CFCs, say the legislators.

The environmentalists, advocates of the Montreal Protocol, are not worried. They believe that the Arizona law can at best have a symbolic significance.