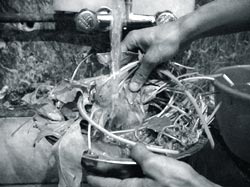 for delhites, consuming palak (spinach) might not be as healthy as portrayed by the famous cartoon character Popeye. Instead, it might lead to high intake of heavy metals, concludes a three-year study conducted by the uk-based Imperial College of London, Varanasi-based Banaras Hindu University, and New Delhi-based Toxics Link, University of Delhi and Indian Agricultural Research Institute.

The study, Heavy metal contamination of vegetables in Delhi, shows that palak grown in the peri-urban areas of Delhi is highly contaminated with lead and zinc. "These areas are highly polluted as they are witnessing rapid urbanisation and industrialisation," says Ravi Agarwal, coordinator of Toxics Link.

Out the 222 samples of palak tested for lead, 73 per cent had contamination levels above the 2.5 milligramme per kilogramme (mg/kg) permissible limit set by the Prevention of Food Adulteration (pfa) Act, 1954. "If we follow Codex Alimentarius -- the international standard -- which specifies the permissible level of 0.3 mg/kg of lead in spinach, then all the samples are contaminated," says Fiona Marshall, lecturer at the agricultural department of the Imperial College of London. Twenty- one per cent of the 609 samples tested for zinc showed the metal's concentration to be far above the pfa limit of 50 mg/kg for zinc.

The researchers found that the major source of lead contamination is atmospheric pollution. "Washing the palak once reduces lead concentration by 23 per cent. Washing it twice and thrice decreases the concentration by 53 per cent and 55 per cent respectively. This means 50 per cent of lead contamination is because of aerial deposition. The rest is either due to soil or water," says Madhoolika Agarwal, a botanist at Banaras Hindu University.

The researchers found that contamination by air takes place during the transportation of vegetables from production centres to markets. This is disturbing as it shows that despite switching over to unleaded petrol, lead concentration in Delhi's air remains high, says D S Bhupal, an agricultural economist at the University of Delhi.

The researchers have also started testing cauliflower and okra for the presence of heavy metals. "Results of the initial tests are alarming," says Marshall.

Agarwal suggests that separate laws should be enacted for food safety, which at present is under the purview of pfa. Legislation should also be put in place for peri-urban agriculture.