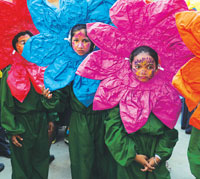 For many years, scientists blamed estrogen-mimicking chemicals for messing up girls, hormonal balance. These chemicals led to early puberty. Others like lead and cadmium delay it. US researchers now show the relation between these metals and hormone levels.

Children can be exposed to lead through deteriorating lead-based paint and lead-laden dust and soil. Cigarette smoke is a source of cadmium. In young girls, lead, alone or combined with cadmium, suppresses the ovaries’ production of hormones that prepare their body to release an egg for the first time.

Researchers from the National Institute of Child Health and Human Development found that girls with increased levels of lead (five or more microgramme per decilitre of blood) were 75 per cent less likely to have adolescence- related hormones, inhibin B and leutinising hormone required for onset of puberty. Inhibin B is a marker of development of the ovarian follicles during puberty. They analyzed the findings of blood and urine samples of more than 700 girls aged six to eleven that participated in the Third National Health Examination Survey between 1998 and 2004 in the US.

Girls with low levels of lead had higher Inhibin B concentrations and vice-versa. Cadmium did not have much effect. But the effect on the hormones was more pronounced in girls with elevated levels of both the metals. Doctors advise treatment for lead exposure exceeding 10 microgramme per decilitre of blood, but the researchers believe that exposure may be harmful at even lower levels. In the past few years, the levels of heavy metals have decreased in developed countries, trumping the effects of estrogen-mimicking chemicals.