Lead the way out

Many cities of the world reel under severe lead pollution as they continue using heavily leaded petrol. The case for the phasing-out of lead is stronger than ever before 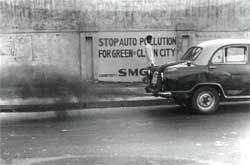 beside the Mersey estuary, in northwest uk, is located a factory that manufactures 80 per cent of the world's lead additives for petrol -- a product that the World Bank ( wb ) has recently called the "greatest environmental threat" to many cities throughout the developing world. Lead has been added to petrol since the '20s, to increase octane number and improve engine performance. It is also said to reduce wear of engine valves in older cars, such as India's Oxford Ambassador fleet.

When leaded petrol began to be phased out in North America, Europe and Japan, it was presumed that the market for lead additives was bust. Most manufacturers shut-down operations. But, "far from petering out," as a profile of the company published in the New York Times last year noted, "the demand for leaded gasoline has remained far stronger than anyone predicted". And Octel Associates turns out bumper profits for its owner, the us -based Great Lakes Chemical Corporation.

Until recently, lead poisoning from traffic had been regarded as a problem of the rich industrialised countries. It was assumed that since developing countries did not have as much traffic, they had less lead in the air. In any case, it was thought that the Third World had more serious problems to tackle, such as infectious diseases.

But this is no more the case. Lead pollution is increasingly being recognised as a global problem. Other sources of lead in the urban environment include dust from lead smelting works and battery-breaking yards, flaking leaded paint and lead plumbing. According to a wb paper called Why lead should be removed from gasoline -- published last December -- even though only one in 50 tonnes of lead used in the world goes as additives in petrol, it accounts for as much as 90 per cent of all emissions to the atmosphere, in many cities of the world.

Lead in petrol is supposed to find an express route into children's bodies because it is emitted from vehicle exhaust pipes in the form of very tiny particles that can remain in the air for weeks and travel hundreds of kilometres before settling onto the ground or being absorbed by the lungs, where it is absorbed into the blood. "Lead impairs the mental and physical development of children even at low levels of exposure," says the wb report. "A highly-significant association has been found between the exposure of children to lead and their iq ." Children also lose the ability to concentrate and can become socially maladjusted. These disabilities could be permanent, continuing into adulthood. The us National Academy of Sciences also concluded in 1993 that blood-lead levels in children measuring more than 10 micrograms (a microgram is a millionth of a gram) per decilitre (a decilitre is one-tenth of a litre) caused irreversible damage to their physical and mental development.

By removing lead from most of the petrol consumed, the us has in the past 20 years cut the average blood-lead level of its citizens to less than five micrograms. Many cities in Western Europe and Japan have achieved the same. But average blood-lead levels in many cities of the Third World and eastern Europe are well above these levels, suggesting that the majority of the population in most of the world's large cities, is significantly poisoned by lead. Some of the values quoted by the wb report include Bangkok, where the average is 40 micrograms, Cairo, which averages 30 micrograms and Budapest and Mexico City, which average 25 micrograms each. Studies in Bangkok conclude that exposure to lead cuts down the iq of the average urban child by four points, by the time she/he turns seven.

A recent study by Jerome Nriagu of the University of Michigan -- who has studied lead poisoning for more than 20 years -- found that childhood lead poisoning is a surprisingly widespread urban health problem throughout Africa, the continent with the lowest density of cars. Africa has just 12 per cent of the world's population, but is responsible for 20 per cent of human-made lead emissions -- a four-fold increase since 1980. The reasons for this are its extensive lead mining and smelting industries and also because it burns some of the world's most heavily leaded petrol. A table of more than 80 countries compiled by the Washington-based Alliance to End Childhood Lead Poisoning, found that a litre of petrol at the pump in most African countries contained more than 0.5 gm of lead and in Zimbabwe, Uganda, Namibia and Ethiopia, it was found to be more than a gram.

Studies have shown that children with sickle cell disease, widely prevalent in Africa, are more likely to suffer from lead poisoning. "Many African children are also short of iron, which encourages their bodies to absorb lead," says Joel Schwartz, public health professor at Harvard University. And "lead poisoning can be a promoter of common endemic diseases in Africa," says Nriagu. What goes for Africa holds true for several other regions of the world, including South Asia.

The Alliance has called for a phasing-out of leaded petrol by the end of the decade. "Leaded petrol," it says is the "single greatest source of human exposure to lead worldwide". The wb 's argument is that removing lead from petrol would be the most cost-effective way of improving children's health and intelligence. And, despite the claims of some industrialists, there are no insuperable technical problems to banishing lead from petrol. Claims that lead is essential to protect valves made of soft metal from wear are rather exaggerated. The cost of modifying refineries and, where necessary, to manufacture substitute additives to maintain high octane number rarely amounts to more than one to two us cents per litre. Brazil, Canada, Colombia, Slovakia, Sweden and Japan have done it. India and Mexico, along with the us are planning to do the same. The wb is planning a major investment programme to help countries modernise their refineries.

Back at Octel Associates in the uk , the company's external affairs manager Bob Larbey agrees that lead would eventually be phased-out, but not yet. He argues that the use of possible substitutes like benzene has its own risks, including causing cancer. But the known extreme hazards of lead ought to be tackled first.