Technique based on water pressure helps pin down pipe leaks 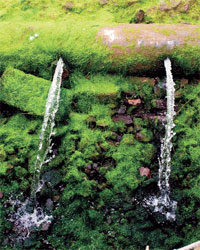 LEAKY pipes are a major concern for water utilities across the globe. An estimated 20 to 40 per cent of water is lost through leakages in distribution systems that often remain undetected. Finding accurate methods to pinpoint the leak so that the pipes can be repaired is a necessity. But tracking leaks in water pipes can be tricky.

Current techniques rely on acoustic sensors with microphones to identify noise resulting from water released under pressure escaping the pipe. This does not work well when the break in the pipe is small. In plastic pipes, the noise can fade quickly, making leak detection difficult and time consuming.

Now, researchers at the University of Sheffield in the UK have developed a more accurate system to locate leaks based on changes in the pressure of water in a pipe. The device is fitted on the top of a pipe and consists of a valve that is opened and closed rapidly leading to water being released with force. An instrument is attached to the base of the device to record changes in water pressure. When the wave encounters an anomaly, such as a crack in the pipe, the water pressure changes. This reduction is noted and the leak calculated based on the size of the pipe, the speed of the pressure wave and the distance it has to travel to pinpoint the leak.

In trials carried out along with Yorkshire Water network, the device was able to locate leaks in cast iron pipes with accuracy to within one metre, while leaks in plastic pipes were located within 20 cm.

The study was published in Journal-American Water Works Association on August 6.

“The device can be deployed in every standard fire hydrant fitting and can be used to detect the position of the leaks in water networks, which serve the common public and not just the systems used for laboratory tests in research institutes,” says James Shucksmith, the lead researcher.