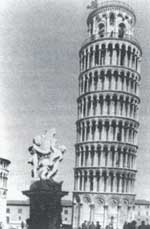 FOR almost 800 years, the Bell tower of Pisa's cathedral has been tilted a wee-bit towards south and for almost as long, engineers, far and near, have tried to stop the tower from what it does best - leaning. In 1989, however, when a similar tower fell down, killing five people, Italian authorities decided that the leading tourist attraction can soon become a death-trap. They shut off public access to the tower and appointed an international commission to restructure it.

The first such commission, way back in 1292, tried to hold the tower in place by building arches and extra staircases on the sinking side. The structure ended up being highly disfigured - almost resembling a giant marble 'banana. The tower, since then, has leaned more than five metres from the vertical. The tower is built on an uneven base of mud, clay and sandy soil and leans south because that's where the soft, muddy layer is at its deepest.

The first thing the current commission did was to bind the tower in a corset - a series of steel hoops to s d the enormous strain entirely through the first and the second stories. Then a concrete ring was built around the base of the tower. Then 750 tonnes of lead ingots were fastened around the southern side to make it firmer and arrest the leaning. The method was initially successful, bringing the tower back in line by a few centimeters, but the method was not very pleasing aesthetically, to say the least.

Moreover, the remedy was, at best, temporary. Another idea was then implemented, based on a new technology - discovered in Japan in the aftermath of the Mexico city earthquake in 1994 - to keep unstable buildings from falling over. The theory was Put to test on a smaller model, where unstable ground conditions were simulated by applying external pressure. Karl 0 Heineger, the person- in-charge for the trials, says, "The purpose of all this restoration is not to straighten it (the tower) up, but to prevent it from further leaning." Using a technique called 'under excavation', he proposed laying some clay planes at specific points under the northern side of the foundation. The clay would subsequently compress, making the north side sink a little and even up the tilt.

The drilling was stage one - then something was needed to hold the tower in place. The team has already started work to secure the tower to a hook nailed 50 m below the surface. Ten anchors of 100-tonne capacity will be attached to a ring of stressed concrete running around the tower's foundation. Once that is done, the ugly lead ingots will be removed and after a survey, the tower will again be opened to the public.