A software programme project that will be a boon to those who want to learn Sanskrit is threatened by a lack of funds. 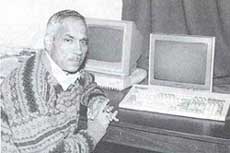 SANSKRIT -- long the preserve of priests and Vedic scholars -- may soon become more accessible to the common person, thanks to a new computerised educational system being developed by researchers at Delhi's Jawaharlal Nehru University (JNU). Says G V Singh, leader of the project that is being conducted at JNU's School of Computer and Systems Sciences, "Sanskrit is a neglected part of Indian tradition. Our software programme will help unlock its rich philosophical and literary content for any user."

The language tutoring system being developed under the CASTLE (Computer Assisted Sanskrit Teaching/Learning Environment) machine translation project can be run on a personal computer. "The package can be used to learn Sanskrit, teach the language in a classroom and to analyse the language's semantic and syntactic structure," declares Singh. The software programme will be of use to both novices and advanced researchers in universities and Indological research institutes.

Systems of natural language processing such as the CASTLE project are artificial intelligence technologies in which computers translate text from one language to another. These machine translation systems are teaching aids that help users understand a language.

The CASTLE project has succeeded in defining the rules of word formation in Sanskrit and in representing it in a way that the machine understands. Points out Singh, "The human user and the computer must know the meaning and usage of words to interpret the text, for which electronic word dictionaries are necessary. In CASTLE, for example, we have defined several meanings of a word, the form of the word and its categorisation as a noun or verb." However, though work on word formation has been completed, the more difficult task of trying to break each word into its base and suffix and then listing the different combinations formed by the suffix linked with various characters is being done.

By working on the rule-based grammar of Sanskrit developed by the sixth century BC scholar Panini, the CASTLE team has formulated several software programmes for word analyses. Put together, these modules will comprise an electronic word dictionary that will be the basis for sentence formation and analysis.

The modules can also be used independently. A basic module called Sandhi, for instance, deals with the synthesis of phonetic characters to make a word, while Subanta makes syntactic units that can be used at the sentence-making level. "These modules are the bricks with which the translation system will be built," explains Singh. The development of sentence rules that help in forming sentences are the team's next goal.

The completed modules are being tested at institutes such as the Lal Bahadur Shastri Rashtriya Sanskrit Vidyapeetha in Delhi.

The JNU team has been working on this programme since 1984, and has been funded by the department of electronics under its Technology Development for Indian Languages programme. However, funds have now run out and Singh fears if funds are not renewed, the Sanskrit and other machine language programmes, like those in Punjabi and Hindi, would be crippled. Says Singh, "We have submitted three proposals to the DOE but there has been no response so far."