With phones becoming more and more intelligent, their distinction with a computer is slowly becomingobscure 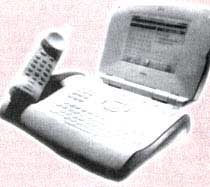 CARDI0 Voice Monitoring, a New Jerseybased company has developed a telephone with a built-in heart monitor which will storm the us market this year. Called CardioVoice, the telephone looks exactly like the conventional one but has an electrode in its receiver that can be used to monitor the heart rate and rhythm.

The CardioVoice phone will cost about us $180. The receiving station is much more expensive, that is, us $10,000. Despite the high price, the company hopes to receive a good response as there are about 60 million Americans with known cardiac disorders. Users only have to press a button on the telephone to call up their doctor's office and then hold the handset against their chest. The data collected by the phone is passed to a receiving station based at the doctor's office.

Apart from the CardioVoice phone, there are a number of other smart phones available in the market. Another us research company probe estimates that about 2.1 million smart phones will be sold in the us this year and the figure is expected to reach 9-5 million by 2000 AD. Another phone that will hit the us market is the Internet home phone. This phone can be used for exploring the Net. it contains a display screen, about seven inches wide, as well as a built-in keyboard, microprocessor, modem and Web browser software for exploring the Internet. Moreover, there is no special software to load or any complicated start-up procedure to remember. Once into the Internet, users can enjoy e-mail facilities, access data-bases or conduct online transactions. Companies which are going to market Internet phones include the Dutch electronics giant Philips, and the California-based Cidco and Navitel.

The us company Diba, and Mitsubishi, the Japanese electronics group are jointly developing so called 'information appliances', consumer devices that can be used for fax, e-mail and accessing online services. These phones will cost us $300 to 500 each and users will have to pay a monthly subscription of $20 to $25.

Naviteps product, the Touch Phone, uses Microsoft's Windows CE operating system, a cut-down version of the Windows 95 operating system used on many desktop Pcs. Touch Phone also uses a web browser developed by Microsoft. According to the Electronic Industries Association of the us, about 95 per cent of us homes have a telephone, with an average household owning 2.4 phones.

The supporters of Internet home phones point out that they are much easier to use than a Pc. "There is a pentup demand for simple cost-effective Internet access devices," says Robert Simon, Navitel's executive vice-president. The potential users for Internet home phones are many as the phones could be used for home shopping and banking, collecting travel data or restaurant information or conducting financial transactions.

The chairperson and chief executive of Philips Consumer Electronics, Doting Dunn says that these products have a large clientale. Smart phones could reach a 10 per cent penetration level in the us by 2000 - and that is a conservative estimate.

A number of companies including Cidco, Philips and the telecoms company Sprint have launched telephones which conform to a standard known as Analog Display Services Interface (ADSI), developed by a company Bellcore. This will enable standard analogue phone networks to handle data and speech.

Telephones which have ADS[ faCilities consist of large liquid crystal display screens for displaying text information and can download special programmes called scripts. Some telecoms companies Use ADS1 to offer a service known as Call Surfing on the Net can be done with this new phone Waiting Deluxe which not only warns a user that someone else is trying to call but also displays the name and number of the person. It also allows companies to send financial, business and enter- tainment information over the phone network.