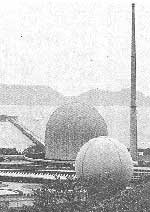 "India's nuclear programme today is a dangerous failure." That was the opinion that emerged during Sixty Minutes, a programme telecast by the Columbia Broadcasting System (CBS) of USA in February. "The truth of the failure of the programme has been hidden from the people," said Dhirendra Sharma, convener of the Delhi-based Committee for a Sane Nuclear Policy.

A Gopalakrishnan, chairperson of the Atomic Energy Regulatory Board, however, retorted that CBS has "deliberately and seriously distorted and misrepresented the factual position of nuclear safety in India". He was supported by Morris Rosen, assistant director general for nuclear safety of the International Atomic Energy Agency (IAEA). During his visit to India in February, Rosen said, "The board is making substantial progress in implementing the safety standards that are comparable to internationally acceptable levels."

Gopalakrishnan, on his part, has set up a directorate of regulatory inspection and enforcement to strengthen safety and regulatory mechanisms. In May this year, experts from AERB and IAEA are to work out a method to assess safety in nuclear power plants.