Leaving the poor aside 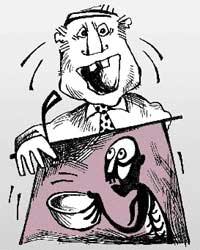 before the Group of Seven (g-7) summit began on June 27 in Lyon, France, there was considerable brouhaha over the world's richest countries trying to persuade the World Bank (wb) and the International Monetary Fund (imf) for a new debt relief plan in order to assist the eight to 20 poorest countries, most of them in Africa. This was the first time that the global lending institutions were attending a g-7 meeting. With this as one of the main issues in the agenda, the summit promised to be different from its predecessors. Instead, it ended with agreements on terrorism, Bosnia and economic strategy, but no solution was found for two problems which needed urgent attention -- joblessness in industrialised countries and the mounting debt burden of the most impoverished nations. As far as the debt issue was concerned, all the big talk simmered out at the end and what was agreed to was much less than what was expected. By tying the question of relief to the debatable issue of imf gold sales, the g-7 safely squiggled out of its responsibilities. "It is outrageous that g-7 leaders can summon the political will overnight to agree to a 40-point plan on terrorism but even after two years cannot agree to sell a tiny portion of the massive 40 billion imf gold reserves to help the poorest countries in the world," charged Justin Forsysth, an official with Oxfam, a private organisation that lobbies on behalf of Third World debtors.

But apart from being unable to persuade imf to sell off its gold, which Germany had opposed from the beginning saying that it would spoil the credibility of imf, the g-7 leaders must be congratulating themselves for a job well done. They agreed to a new plan that would combine debt write-offs, the allocation of upto us $2 billion by the wb and the use of imf resources. They leaders agreed to use imf resources to subsidise soft loans to the world's worst-off nations. The g-7 also urged creditor nations, which now write off as much as two-thirds of bilateral debts of the poorest countries, to be even more generous. Officials said they hoped 80 per cent write-offs would become the norm.

But the moves were flayed by several non-governmental organisations, who believe that decisions taken at Lyon will not help indebted countries out of the debt trap. They said that rather than helping alleviate poverty, the g-7 approach will instead increase the debt burden of the poor, constrain their economic opportunities and drive wages and employment to new lows. What roused the ngos was the fact that g-7 committed itself to a continuing enhanced structural adjustment facility at the imf as the centrepiece of its support for the poorest countries. The problem with the proposal is that it offers too little. According to Oxfam estimates, Uganda spends more than five times each year on debt repayment than it does on health care for its citizens. Many countries in sub-Saharan Africa have been crushed by the excessive loans. The proposal would have them wait six years for substantial relief.

Almost everyone agreed that some countries are so indebted that they cannot hope to reduce their debt to sustainable levels without some extra help from official donors. The wb had set the ball rolling by agreeing to allocate us $500 million to the debt relief initiative and us $200 m each year thereafter, a week before the summit. The imf's slice was not decided because of a stand-off between Germany and the rest of the g-7. French President Jacques Chirac, who was the chairperson of the summit, did push the issue to a certain extent but with bomb attacks on us soldiers in Saudi Arabia and a British army base in Germany adding urgency to the three-day talks, a 40-point international plan to combat terrorism and crime was the only noticeable achievement of the event. In the closing news conference President Clinton said, "It's not a cold war, it's not World War ii, but it's an important part of our struggle to make this a civilised and a sane world, and we have to continue to do this."

With Germany reluctant to drop its reservations against the selling of the gold reserves and Chirac trying his best and yet failing to lessen the plight of poor nations, the issue of debt relief was more or less left unresolved.