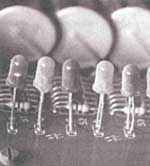 LIGHT emitting diodes (LEDS) are C0113monly used as displays for many con- Sumer electronics products. In the last few years, tremendous progress has been made in the technology for improving the quality of these display units. LEDs with much higher light intensity and a longer life have been developed now, leading to more reliable and robust applications in consumer and entertainment electronics.

Polymer-based LEDS were developed about five years ago. Initially, these organic LEDS were considered promising because of their versatility and cfficiency. These hopes were however belied because the polymer-based LEDs had a much shorter shelf life and an even shorter working life.

But now a team of researchers at the UNIAX Corporation in us has developed a new design for polymer LEDS. The basic mechanism for producing light in LEDs is the phenomenon of clectraluminescence. Two electrodes, sandwiching a semiconducting material, inject negatively charged electrons and positively charged electron vacancies or holes into the semiconductor. These opposite charges meet and recombine to produce energy (Science, Vol 269, August 25, 1995).

Depending upon the properties of the semiconductor used, the energy has different wavelengths (and colour). In polymer-based devices, the charges cannot move freely because of the low conductivity of the material. Therefore, very reactive metals (like calcium) are used.

This however is a problem since the metal degrades quickly in the presence of oxygen and the device has to be sealed from air, raising its cost and reducing its reliability. There is an additional problem in using polymers: the need for high voltages to operate some of the devices. The high voltages heat up the polymer and damage it.

The UNIAX team has designed a novel light emitter called a light emitting electrochemical cell wh much easier to fill up with ch thereby obviating the need for re. electrodes and high voltages. Re chers did this by adding charged the polymer, which boosts the cot tivity of the polymer when the de powered. They have experim, using stable metals like aluminnu electrodes and have got a range of, lengths from the devices.

The new design, having been with shelf lives of about a year, cc Des to work well. Given the advar of polymer-based LEDS, if the des commercially viable, it may well b a revolution in display technology.