Left demands right to food for every Indian 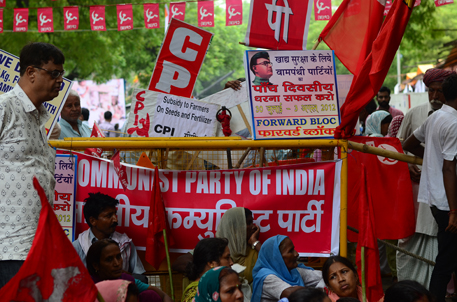 The left leaders supported by farmers, women and industrial workers have called for amendments in the clause in the National Food Security Bill that divides PDS beneficiaries into two—above poverty line (APL) and below poverty line (BPL).

“Right to Food Bill in its present form is defective and inadequate as it does not entitle every Indian for ration under public distribution system. We demand that PDS should be streamlined in such a manner that every family should get 35 kg of foodgrains at Rs 2 per kg. There is no question of accepting the recommendations of Planning Commission on division into APL and BPL families,” says D Raja, member of Parliament.

Raja says that it is an irony that at a time when millions of poor in India are dying of hunger, the Centre is more interested in exporting wheat to other nations and allowing it to rot in godowns. “We fail to understand what is stopping the government from distributing foodgrains to the poor,” he adds.

The protest was attended by communist leaders and members of Parliament, including A B Bardhan, Prakash Karat and Brinda Karat. The leaders also rejected the Centre’s proposal to replace PDS ration with cash transfer. They reasoned that given the inflation it will be impossible for the people to buy foodgrains from the meagre amount they will get in place of ration.

They alleged that the government had failed to stop black marketing and forward trading of foodgrains which was resulting in price rise. “Prices of food commodities, be it vegetables, pulses or milk, are going beyond a common man’s means. If the middle-class is finding it tough to manage their food needs you can very well think about the poor,” said one of the leaders while addressing the gathering.

The agitators, who included a number of farmers, complained that the prices of fertilisers and seeds were increasing and the government had failed to check them as well. Baldev Vishkarma, a farmer from Chitrakoot district in Uttar Pradesh, wanted to know why the common man is paying such a high price for the foodgrains when minimum support price for wheat and rice is so low. “We fail to understand government’s economics. Farmer gets lower prices for his produce, but the people who buy it pay a high price. Then who is pocketing the profit?” he asks.