Left in the lurch

Insat 2D, India's most advanced communication satellite, has been abandoned 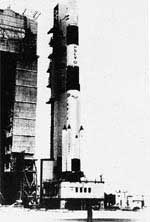 the history of India's satellites welcomes yet another orphan. The latest to be abandoned is the 2,070-kg, Rs 450-crore Insat 2d , launched on June 4 from Kourou, French Guyana. The chief reason for failure of the satellite - plagued by a series of snags - was a jammed solar panel. Meant to be a communication satellite, Insat 2d is placed 36,000 km above the Earth, along the 74 e longitude line. The satellite's failure has affected several services in the country as it was pivotal to national and international telecommunications. It aided transmission of voice, fax and data. The National Stock Exchange (nse) at New Delhi has had to suspend operations.

After having suffered a short circuit on October 1, Insat 2d lost control and began rotating.It lost its "earth-lock", a condition in which the satellite's antennae do not point towards the Earth. As a result, it could not receive radio commands from the Master Control Facility (mcf) on Earth, for performing vital operations like positioning itself, orienting its solar panels, and activating the transponders that receive and transmit signals.

Indian Space Research Organi-sation's (isro's) scientists at the mcf , in Hassan, 150 km from Bangalore, tried hard to lock the satellite again towards the Earth. They temporarily succeeded as the earth-lock was lost again on October 4. By now a new problem cropped up. The drive mechanism for rotating one of the two solar panels - that constituted the satellite's sole source of power - got jammed. isro officials said that the panel drive got jammed due to "some unknown reasons within the drive assembly". The panels could not generate enough power to activate many of the heaters which maintain the balance in temperature between the cold and hot sides of the satellite. The satellite was running on 30 per cent of the actual supply of power needed. Consequently, the propellant lines froze and the thrusters that steer the satellite could not work. The satellite lost its moorings. This time, the mcf could not adjust the satellite's position. The very same day isro officials gave up on the satellite.

The timing of Insat 2d's failure could have hardly been 'better' as isro's scientists were at that time already struggling to correct the orbital parameters of India's latest satellite, the remote-sensing irs -1 d , launched on September 29. Some progress has been achieved on that front.

isro is now planning to move Insat 2d out of its present position as it could pose a hazard to other satellites using that slot. The loss of this satellite has posed a shortage of transponders operating in the upper c -band - a fre-quency range used in telecommunications.

Many services have been affected by the satellite's failure. Eighty three telephone exchanges in north India have suffered. Private operators using Very Small Aperture Terminals (vsats) - antennas used for broadcast reception and communications - linked to the Insat 2d transponders, have also been affected. The nse has the largest number of vsat s. Out of 1,600, 779 of its vsats have been affected. These vsats will now be temporarily switched over to Insat 2a .

The Insats have left behind a trail of failed missions. Insat-1 a - launched in 1982 - was also abandoned due to problems with the solar panels. The us -built Insat 1- c , launched in 1988, was hit by a short circuit, a week after its launch. It managed to continue functioning with half its transponders for a year before giving up.