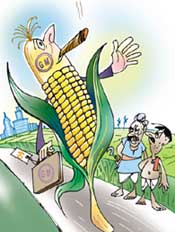 the Union ministry of health and family welfare (moh&fw), on March 10, 2006, accepted the Indian Council for Medical Research's (icmr) recommendations on labelling genetically modified (gm) food. This is the first decisive move towards a gm food regime in the country. But the wisdom of the move has been questioned. While some have welcomed it, others say it is retrograde because the new regime will make it impossible in future to ban gm food, which raises serious health questions. The Central Committee for Food Standards, a statutory body under Prevention of Food Adulteration (pfa) Act, 1954, had asked for recommendations from icmr, so that pfa rules could be amended to incorporate gm labelling.

According to trade analyst Ranjan Kumar, "Labelling gm food in India is important since it imports considerable corn and soybean." India had imported two million tonnes of soya oil in 2004-05. But farmer leader Vijay Jawandhia thinks the move is clearly an approval for all gm food imports. He says, "Though gm food existed in the Indian shelves when quantitative restriction on food imports was lifted in 2001, it had no legal acceptance and could have been banned easily. But these new rules mean India is accepting gm food for public consumption. This will promote foreign agribusiness." gm contamination is also suspected in other imported products like tomato juice, tomato ketchups and potato chips.

The new rules will also expedite promotion of domestic manufacturing of gm food. Cotton being the only legal gm crop in India, the only domestically produced food product with possible gm content is vegetable oil -- nine per cent cotton oil. T Ramannaiah, director, department of biotechnology, Union ministry of science and technology, said, vegetable oil containing gm cotton would be free of toxic effects only if double refining is carried out. However, local manufacturers are known to avoid refining due to high costs involved, and there might be a loophole there.


The proposed rules will also require labels on gm foods. The labels need to disclose necessary information about the transgene (origin of genetic modification) and the processes involved. Though the exact nature of tests to check the accuracy of labelling has not been finalised, a senior bureaucrat in the moh&fw says testing for allergens, potential toxicity, nutritional composition and the effect of gm foods and crops on health and environment should be undertaken to confirm labelling standards.

The permissible limit of gm ingredients in food, as proposed by icmr, is marginally higher than the European Union (eu) norms. While eu has fixed gm permissibility in food at 0.9 per cent, the most stringent in the world, Japan allows up to 5 per cent. icmr has fixed it at 1 per cent for India.

India must learn from eu's experience where, despite existing infrastructure and funding for gm food testing, eu regulators struggle to implement rules. Besides, the proposed rules in India don't mention punitive action, while the eu rules are clear on it. This makes fake labelling exercise a cakewalk for the marketer.

Anju Sangwan, researcher and coordinator of food safety division with the New Delhi-based organisation Consumer Voice, is skeptical of the move. She says, "Although India is considering a strong labelling regime, it doesn't have the necessary infrastructure to conduct the required testing." A senior scientist at the National Bureau of Plant Genetic Resources, New Delhi, says, "India has no lab that can actually do large-scale testing for food with gm traces as low as 1 per cent."


Contamination is another area of concern. Though imported food is suspected for maximum contamination it gets an easy walkover. The rule merely proposes that imported gm food indicate that it has been cleared for marketing and use in the country of origin, and thus no verification test is mandatory for the importing country.

There could also be a problem at the World Trade Organization (wto). wto's International Codex Committee on food labelling is yet to include mandatory labelling for gm food, owing to us pressure. Thus, if India seeks mandatory labelling of gm food, it runs the risk of being challenged at wto .

There is good resaon to fear that the proposed rules won't address health issues, leaving ample scope for manipulations.