The fascinating story of how the Gond tribe came into being 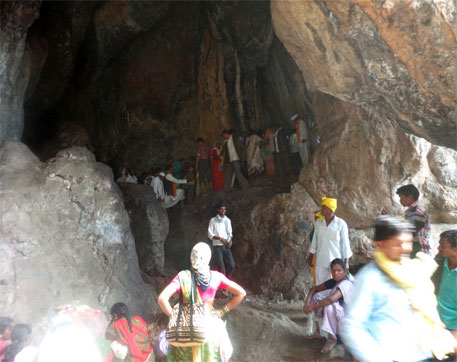 In the beginning, the world was populated by the Koyatur (born of the koya or womb—human beings). All humans had a common identity as Koyatur.

Among them was Kali* Kankali, a widow with 28 children. They were living in the hermitage of Raitad Jango, a female community leader. One day, the children of Kali Kankali wandered off from the hermitage and got lost among the hills of Kachchargadh where they were found by Sambu Madaav** and and his wife Gaura. Gaura took care of the children, but they began to pester her for breast-feed. To distract the children, Sambu released a ghorpad (monitor lizard). The children chased the lizard into a cave, and Sambu closed the mouth of the cave with a rock. The children remained imprisoned in the cave for 12 years, and Gaura threw them food through a hole in the roof.

Meanwhile, Kali Kankali found out about the incarceration of her children and asked Sambu to release them. Sambu said that he would release the children only if a teacher could be found who would teach the children to behave better. Enraged, Kali Kankali attacked Sambu riding on a lion. Gaura released a pack of wild dogs on Kali Kankali. Seeing the dogs, the lion ran away and Kali Kankali fell on the ground, losing her strength.

When Raitad Jango found out, she went to her brother Payandi Pari Kupar Lingo, who was meditating in a cave nearby, and asked him to ensure the release of the children. Lingo talked to Sambu. The latter agreed to release the children but on condition that Lingo take responsibility to educate them. He, however, expressed inability to move the rock he had closed the cave with. Lingo realised that the only way the children could be freed was if they could themselves push away the stone blocking the entrance of the cave.

So he fetched Hira Suka Patalir, a musician and “kingri” (tribal musical instrument) player from the village Dhanegaon, who sat near the entrance of the cave and started playing “veer rasa” music to inspire the children with courage. When the children heard the music, they pushed the stone, and it fell on Patalir and killed him on the spot. Lingo then took the children – who went on to become the founders of the various Gond clans – under his tutelage. Lingo thus became the first teacher (adi guru) of the Gond tribe. The children instructed by him in culture formed the Gond tribe, who were different from the rest of the Koyatur of the world.

Note : The legend of Pari Kupar Lingo and the Kachchargadh caves was first recorded in written form by British clergyman and scholar B B Chatterton in his 1916 book The Story of Gondwana. It has also survived in the oral traditions of Gond tribal groups. Details of the location of the Kachchargadh caves, however, had become lost over time. In the 1980s, groups of young tribal students from the Adivasi Vidyarthi Sangh began to scour the hills of Kachchargadh in Gondia district in search of a cave that met the description in the story. And sure enough, a group, including writer Motiravan Kangali, found this large cave near village Salekasa, with a huge hole in its roof (through which Gaura might have thrown food to the trapped children), with a large boulder sitting beside the entrance, as if just pushed aside. Since then, the Kachchargadh Yatra, a yearly pilgrimage during which Gond people bring their Angadevs – root ancestors – symbolised as highly decorated palenquins – to visit the site of their incarceration and pay homage to their teacher.

* Not to be confused with the Hindu deity Kaali

** Books on Gondi mythology say that the name Sambu Madav may be the origin of the names ‘Shambhu’ and ‘Mahadev’ attributed to the Hindu deity Shiva. But in Gondi religion, Sambu Madav is a tribal head or father – unlike the immortal Hindu deity, Gondi history records a succession of Sambu Madavs