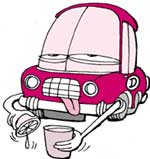 Lemon juice spruces up not only exhausted humans but car exhausts too, say researchers from the Institute of Catalysis and Petrochemistry in Madrid, Spain. Their report appeared online in Environmental Science and Technology recently.

Catalytic converters of cars that run on diesel become inefficient after the vehicles are driven for about 80,000 kilometres. This is because of deposition of sulphur (present in the diesel) and phosphorus (from anti-wear oil additives in the engine oil) on the platinum honeycomb structures in the catalytic converter. The platinum acts as a catalyst to convert poisonous carbon monoxide and unburnt hydrocarbons into more benign carbon dioxide.

The scientists found citric acid -- which was produced industrially rather than by squeezing lemons -- removed up to 82 per cent of the phosphorus and about 90 per cent of the sulphur from the catalyst of a car driven 48,000 km. The wash cycle took six hours at 80C.

Researchers have tried various methods to clean them out in the past, mostly involving strong acids. But while these often do a good job of wiping away the gunk, they also tend to eat away at the valuable platinum.