Lend me your ears

Hitachi, the Japanese electronics corporation is admirably manipulating the wonders of science for the much ignored field of telecom for the deaf. A fascinating new technology being developed opens up the world for the deaf by making it possible for them to communicate on a global scale 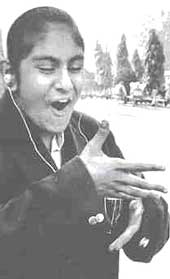 THE deaf and dumb may finally have a voice in this largely insensitive world. Hitachi, the Japanese electronics group, is harnessing three rapidly developing technologies - computer based-imaging, voice recognition and automatic translation - to help a person converse with someone deaf hundreds of miles away in a foreign language, and be clearly understood.

The deaf person seated in front of a computer wears a glove which enables the machine to recognise the sign language used by him. This is then translated first into Japanese text, and then into English. A voice synthesiser converts the English text into spoken English which is then transmitted over the phone line to a simple video phone. The screen at that end shows the speaker and provides the words in both spoken and written English.

The person on the other end need not be proficient in lip-reading nor should he or she have undergone special training in understanding sign language. To reply, one just has to speak normally into the videophone and the entire process is then reversed. The deaf person views the reply on the screen in written Japanese through a computer-animated image of a person using sign language.

A Hitachi spokesman says that the project would be completed within two or three years. But there still remains a lot to do. The company which is already working on a base of about 500 signs, will have to recognise ,619ah-k- 4,500 more signs before it is formally marketed.

Scientists at Hitachi plan to incorporate a three-dimensional computer graphics technology to ensure that the machine produces three- dimensional images of the face and the upper part of the body on the screen. This is essential because if sign languages are to be understood on a screen, three-dimensional images are required. The scientists have also to develop a software to ensure the smooth transition between signs.

According to Stewart Simpson, the chief executive of the Council for the Advancement of Communications with the Deaf People, the concept is Imind boggling', and could do away with the need and use of interpreters used in various services such as Typetalk run by the Royal National Institute for Deaf and the British Telecom. "We would welcome anything that facilitates the growth of technology in this field as this may help overcome communication problems for deaf people. It seems very exciting and I hope that the project is successfully completed," he adds.

Simpson argues that every country has its own sign language and attempts to develop an universally acceptable international sign language have not been successful. So further work may be required to adapt the Hitachi system for use by people knowing English and other languages. For instance, there are nearly 8.4 million people in Britain alone who suffer from hearing loss.

Colin Brooks, head of research and development at Palatype, a British company manufacturing equipment for simultaneous written transcription of speech, believes that the Hitachi telephone system, while still a prototype, is just amazing. "We shall keep our eyes on it to see if we can develop things capable of working with it. At the moment, the system is geared to work for the Japanese, so whether it can be adapted to work for those who know English remains a puzzle. But it is certainly a step in the right direction," he adds.

Brooks thinks that once people develop better access to advanced telecommunication systems, a number of inhibitions would automatically dissolve. This, in turn, would create a climate which is conducive for fostering a healthy relationship between the deaf and those not afflicted with such a handicap.

Even though Hitachi is unwilling to forecast the costs and the computer capacity it will need, the company believes that several potential uses of this particular technology will continue to emerge.