Lenses for the Hubble 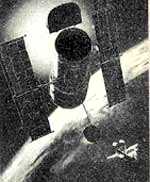 SEVEN astronauts returned to earth on December 13, 1993, after completing an unusual job: Rectifying a defective mirror on the Hubble space telescope. The $1.6-billion telescope was launched in 1990 with a defective mirror that prevented it from focussing on remote objects of the universe.

The astronauts installed 11 new parts -- mainly optical devices -- to compensate for the mirror's deficiencies, which had reduced the telescope's efficiency to 20 per cent and resulted in pictures surrounded by a fuzzy halo. However, only after two months of tests will it be known if the 11-day repair mission has been effective.