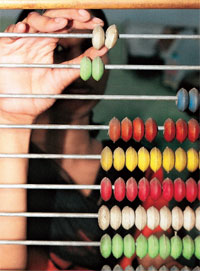 THE World Health Organization has raised alarm over leprosy spreading across India. With the disease infecting about 120,000 people every year, the country is now the biggest contributor to the global leprosy burden, the UN body said in a press release.

The Union health ministry had declared the disease, which causes lesions on the skin and attacks nerves in the hands and feet, often resulting in amputation and disability, eliminated in 2006.

After five years of declaring elimination of leprosy, WHO says 100,000-120,000 new cases every year is a serious public health concern. Most new cases are in endemic states and some 209 of the total 630 districts still have very high number of leprosy cases; 10 per cent of these cases involve children. The contagious disease, which spreads through droplets from the mouth and nose of infected persons, may get out of control unless urgent measures are taken.

The ministry, which recently invited leprosy officers from 16 endemic states to discuss elimination strategy, however, says this is not a worrying trend. “If we reconcile the figures with the current Indian population of 1.2 billion, there is one new case per 10,000 persons, which is the criterion to declare a region leprosy-free,” says M C Agrawal, deputy director general of the Central Leprosy Division. However, he acknowledges the need for focused approach in target areas where prevalence rate is high. 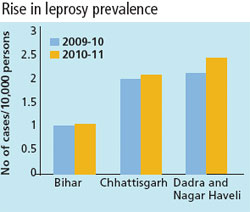 The prevalence rate of leprosy has increased in endemic, poverty-striken pockets of Chhattisgarh, Bihar, and Union territory of Dadra and Nagar Haveli (see graph). They had not eliminated the disease in 2006 when it was declared eliminated in rest of the country. As per the Central Leprosy Division these regions account for 22 per cent of the country’s load of new leprosy patients.

For the past two years the number of leprosy patients has remained constant instead of coming down, says Yohei Sasakawa, WHO’s goodwill ambassador for leprosy elimination. Nata Menabde, WHO representative to India, emphasises on the need of a partnership of the Central and state governments with international leprosy agencies for a complete elimination of the disease.

Public health experts blame the current resurgence of the disease on shift in the attention of the government and international agencies supporting the cause. “After 2006 complacency crept into the govern-ment’s policy towards leprosy eradication,” says Vivek Pai of Bombay Leprosy Project, a non-profit. He says, the government stopped active search for new leprosy patients after 2006. New cases are now detected only on the basis of voluntary reporting. And this does not work as leprosy is still a social stigma, he adds. Leprosy patients usually come from poor and backward areas. Many do not report the disease fearing marginalisation. What adds to the stigma are 16 archaic laws that discriminate against leprosy patients. They include bans on contesting an election, obtaining a driving licence and travelling on train. International agencies also shifted focus from India. German Leprosy Relief Association, for instance, stopped funding Bombay Leprosy Project last year. “Treatment gets delayed at times due to fund crunch. There is less fund for organising awareness camps which are important to encourage people to report cases,” Pai adds.

Maybe the ministry can take its cue from states like Delhi and Rajasthan where the prevalence rate has come down. In Rajasthan the prevalence rate has come down to 0.16 per 10,000 persons. The state attributes it to ASHA (Accredited Social Health Activist) workers who have been roped in for identifying leprosy patients in rural areas. An ASHA worker gets Rs 400 on detecting a new case.

“Leprosy easily gets treated with a multidrug therapy for six to 12 months,” says S P K Athreya, dermatologist at Leprosy Mission Hospital in Delhi. “All that the government needs to do is increase awareness about the disease and identify patients,” he adds.

Where did leprosy originate?
Awry
A ray of hope for leprosy patients
Scuttling scabs
Old diseases coming back