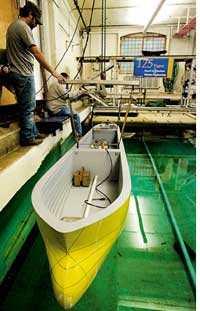 cargo ships sailing from coast to coast often transport unwanted freight. Marine plants, animals and microbes regularly hitch rides to distant shores in these ships' ballast water, seawater stored in narrow tanks in a ship's hull to stabilize it when it doesn't have cargo. This water is pumped out when the ship reaches a port and loads cargo, releasing invasive species that often alter coastal ecosystems. For instance, the American comb jelly, introduced through ballast water to the Black and Azov seas, devastated fisheries in Eurasia.

Researchers at the University of Michigan have come up with a ship design that considerably reduces this problem by reconfiguring the ballast tanks. The new design allows for a constant flow of local seawater through large pipes, called trunks, running from bow to stern below the waterline. " The system replaces water in one to two hours or about every 30 nautical miles on a typical trans-Atlantic voyage, " says Michael Parsons, professor of naval architecture and marine engineering and co-leader of the project.

Removing invasives from ballast water usually requires expensive onboard sterilization systems that use filters, ultraviolet irradiation, chemical biocides and other technologies that can cost over us $500,000. The new design not only does away with this, it also uses less fuel, the researchers say. While testing a model ship they found it consumed up to 7.3 per cent less power for propulsion. The design would save the capital-cost of about us $540,000 per ship, they say. Combined with the expected fuel savings, the total cargo transport costs would be cut by us $2.55 per tonne.

"This idea has been suggested before and structurally it makes sense," says V Ananthasubramanian of the Department of Ocean Engineering, iit, Chennai. "The hull design will cost more as the design requires the hull volume to be greater than a conventional design, but then the ship would save on having to pump the ballast out."

However, the problem of sediments in the water is not answered by this design. Just like in traditional ballast tanks, sediments will accumulate in the trunks and these could contain microbes and algae. Also, barnacles could attach themselves to the insides of the pipes. "These problems remain. But it is easier to clean the trunks of the ballast free ship. They are designed to be hosed down," says Parsons.A report on the latest test results on this new ship design is to be published in the April issue of Transactions of the Society of Naval Architects and Marine Engineers.

The design comes at a time when the international community is waking up to the ecological and economic costs of invasive species. These species alter the local food chain by depleting specific resources for other species. They often out-compete native species when their natural predators are absent. It is estimated that the cost of dealing with invasive species in the us alone is $138 billion a year. Global costs haven't yet been quantified. In India, the only known nuisance species is the black striped mussel, which has invaded the Mumbai and Visakhapatnam ports.

Legislation on ballast water has been in the works for a few years now. The International Maritime Organization (imo) framed an International Convention for the Control and Management of Ships' Ballast Water and Sediments in 2004. The convention requires that all ships have a system where ballast water is discharged at least 200 nautical miles from land, in water at least 200 metres deep. However, these measures only reduce the chances of a species becoming invasive. The assumption is that by exchanging ballast water on open seas the ballast dumped in the port would have species from high seas and these would not thrive in coastal waters, where conditions are different.

imo's marine environment protection committee met to discuss ballast water management systems in early April. The committee is urging countries to sign the 2004 convention. "The convention has been ratified by just 13 countries, representing 3.62 per cent of global shipping. To come into force, it needs ratification of 30 countries," says Natasha Brown, imo's spokesperson. India, despite its vast 7,600 km coastline, is among those yet to ratify the convention. This could be because there has been very little research here on marine biodiversity, let alone aquatic invasives.