How animals treat themselves with various plants provide medicinal leads to scientists. 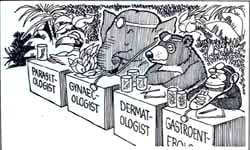 Elders of the Navajo tribe still recount the legend of how the Bear, a great medicine being (What on earth does this mean?), instructed them to use a forest root for treating parasites, stomach problems and infections. There is now growing scientific evidence that this and other legends are based on reality.

The Navajo say that on a hot summer day, as insects hampered their search for food, their hunters saw a great bears extract a root from the ground, chew it and spread the juices on its body. They discovered that the juice of the root -- known as osha or bear-root (Lingusticum) -- successfully warded off insects, allowing the bear to forage undisturbed.


Recent observations of wild bears confirm they do use the root -- orally and externally -- and pharmacological analysis has revealed it contains compounds active against fungi and insects. Scientists are increasingly discovering that not only ethnic tribes living in the wild, but the knowledge and behaviour of their animals, could show the way to new drugs, giving rise to a new area of study -- zoopharmacognosy (Ceres, Vol 25, No 5). Ethnobiologists believe that, apart from experimentation over generations, the tribes also learnt the medicinal value of many plants through observing animal behaviour. Scientists hope that studying the self-medicating behaviour of animals could narrow down their search for useful plants. Documentation indicates that if plants termed medicinal by indigenous people are pharmocologically screened, the probability of positive results increases at least two-fold. Looking for clues in the animal world will make chances of success more likely, scientists reckon.

While studying animal behaviour, scientists have come across a number of interesting leads. Pregnant elephant cows seek out a particular species of plant in which to browse a few days before giving birth. And they have also learnt that this plant is used by the local people to assist pregnant mothers deliver. Birds in the Amazonian forests have been found to eat toxic caterpillars on the ground to protect themselves against parasites. Chimpanzees have been observed to consume Aspilia leaves first thing each morning. Scientists have since discovered that these leaves contain anti-fungal, anti-viral and anti-parasitic compounds.

Michael Huffman of Kyoto University, who is researching chimpanzee behaviour, and Mohamedi Seifu Kalunde, a Tanzanian park ranger, observed a chimpanzee who was ill and had lost her appetite seek out a Vernonia amygdalina plant and eat several shoots, chewing the pith, consuming the bitter juices and throwing out the woody parts.

On examining the plant, researchers realised it was traditionally prescribed for gastrointestinal problems by herbal healers of several African tribes. The laboratory analysis revealed the plant to have several anti-parasitic properties, including against common tropical afflictions such as amoebic dysentery, malaria, schistosomiasis and leishmanaiasis.