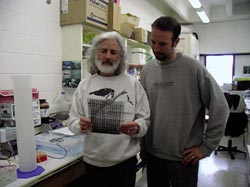 it is well established that air pollution leads to several adverse health affects like asthma. A new study now confirms that impacts of pollution is not limited to just one generation. Researchers from Canada's McMaster University have found that offspring of mice exposed to pollution have higher rates of genetic mutations than the progeny of animals housed in non-polluted environs.

In 2002, the researchers had found that mice housed in places downwind from steel mills passed on double the dna mutations as compared to mice placed in cleaner countryside. "Now we have nailed down the reason: soot," says James Quinn, the lead researcher. The microscopic soot particles are mainly emitted by factories, power plants and diesel-powered vehicles.

During their recent experiments, the researchers housed two groups of mice near steel mills for 10 weeks. One group breathed outside air, while the other was housed in a chamber equipped with filters that block microscopic particles. The mice were bred and their offspring were examined for dna mutations passed on from the father's sperm. Mice who breathed filtered air had mutation rates 52 per cent lower than the mice exposed to soot (Science, Vol 304, No 5673, May 14, 2004).

As per Quinn, the findings highlight the importance of using filters. "If I were living in an area that is heavily industrialised, I would have filtration systems in my house," he says. As flora acts as a natural filtration system for particulates, urban planners should in particular delve into the findings.