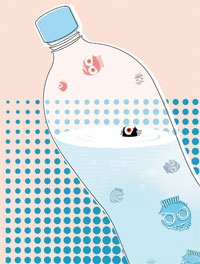 OMNIPRESENT chemical Bisphenol A (BPA) is bad news for our hormone system. But it’s worse when acting in combination with similar chemicals. A study has shown that a mixture of BPA, Bisphenol S (BPS) and nylophenol (NP) can incur much greater damage than what these known hormone-disruptors can cause in isolation. What is worse, such chemical mixtures are fairly common in our environment.

Estrogens are key hormones in humans. Though produced in minute quantities, they regulate important reproductive functions in both males and females. Alarmingly, today’s man-altered world consists of several compounds that can mimic these hormones, interfering significantly with the bodily functions in the long run. BPA is the most common of such estrogen-mimics. In commercial use since 1957, the hormone-disruptor is commonly found in plastic goods, inner lining of metal food cans and drums and thermal-paper used in receipts.

As more and more people became aware, and wary, of the ill-effects of BPA in the past few years, BPS was introduced as a safer alternative. But studies have shown that pre-release tests with BPS missed some key facts—recent in vitro tests have revealed that BPS also acts as an estrogen-mimic even at very low concentrations. So next time you see BPA-free written on your water bottle, be aware that it has got BPS instead, and that is not a safe option either. NP, a surfactant commonly used in industrial applications and for cleaning oil spills, is another estrogen-mimic.

Cheryl S Watson and Rene Vinas of department of biochemistry and molecular biology at the University of Texas Medical Branch in Galveston, US, have been studying BPA, BPS and NP for a long time. One fact that bothered them was that these estrogen-mimics are never present in the atmosphere in isolation but always as mixtures. How were these mixtures affecting the human body?

“Environmental estrogens activate or inactivate enzymes in patterns different from normal hormones. They also alter normal cell birth and death and disrupt the secretion of another hormone, prolactin,” says Watson. Such disruptions can wreak havoc on vital body functions like reproduction, development, offspring survival and behaviour, among others.

The scientists chose rat pituitary cells for their study because “they are from the “master gland” that controls hormone secretion and responses of many other glands and organs. Therefore, if a disruption occurs in these kinds of cells, it can affect the whole body.”

“Plastics are useful and we cannot take drastic measure of eliminating them completely, but we have to be rational in avoiding toxins in plastics and ensure they do not leach out toxic stuff,” says Kannan Kurunthachalam, research scientist at Wadsworth Center of the New York State Department of Health. He has done pioneering work on measuring BPA and BPS levels in the urine of western and Asian populations, including Indians. “We can also try to find a way to use plastics wherein human and environmental exposures can be minimised or eliminated,” adds Kurunthachalam.

Time to go back to glass water-bottles and steel lunch-boxes?