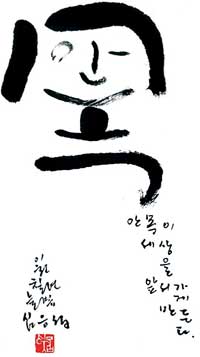 South Korea is known for its electronics industry. Now, a former real estate tycoon is determined to make her mark with an unusual export: Hangul, the Korean alphabet.

The project had its first success in July, when children of Cia-Cia, an Indonesian tribe, began learning the Korean alphabet. "I am doing for the world's nonwritten languages what Doctors Without Borders is doing in medicine," 75-year old Lee Ki-nam said. She plans to take the alphabet to places where people lack indigenous written systems to record their languages.

In Korea--the country has a national holiday called Hangul Day--Lee's achievement is viewed with pride. The effusiveness is tied to the Korean attachment to Hangul, a distinctive combination of circles and lines.

Outside Korea, however, Lee's mission has been contested: some Muslim countries see this as South Korean zeal to spread Christianity."If this is a kind of hobby, that's fine," an Indonesian official said referring to the decision by the Cia-Cia ethnic minority to adopt Hangul. "But they don't need to import the Hangul characters. They can always write their local languages in Roman characters."