Down to basics
I am a resident of Jamalpur Maan in the Bijnore district of Uttar Pradesh. The groundwater in this area is poor and turns the simplest day-to-day chores -- washing cloths, cooking and drinking -- into an ordeal. It is also detrimental to health and even has a discolouring effect on the teeth. What could be the possible factors responsible for this? Can something be done about it?

Recently, I came across a news item in which it was reported that some villagers in Madhya Pradesh are using soft drinks as pesticides. Is there any truth in these accounts?

The report 'Marvel Unearthed' (Down To Earth, Vol 13, No 7, August 31, 2004) is misleading. First it alleges that "microbes present in the soil convert phosphates into an immobile organic form", and then it goes on to applaud mycorrhiza fungi for providing phosphate through filaments symbiotically attached to the plant roots. It appears that the author is undecided as to whether microbes are villains or heroes in the plant nutrition script!

If we look solely to the genes for an answer, chances are we will lose the plot. What the report failed to stress was the importance of a living soil housing these marvellous phosphorising microbes -- fiddling with genes alone will only help secure fat research grants.

The problem of phosphate uptake has emerged so dramatically because chemical agriculture has killed off the precious symbiosis between plant root and microbes with the insane use of fungicides and other such toxins. No amount of gene manipulation will compensate for a dead soil.

DTE REPLIES
The story "Marvel Unearthed" is about a scientific feat achieved by scientists. The work is particularly significant given that to date very little is known about the genetic mechanism that enables plants to derive phosphate from soil. The finding is significant as phosphate is a very impotant plant nutrient.

The article was not written with the idea of passing a value judgement on the development; it was aimed at informing the readers about the feat and its noteworthy implications.

There exist certain bacteria in the soil that compete with the plants in soaking up the available phosphate (whether it is naturally found or supplied through mineral fertilisers). They have one aim: survival. The ensuing metabolic activity converts a good quantity of phosphate into an immobile form, thus making it unavailable to the plants. Meanwhile, fungi present in the rhizosphere (soil region on and around plant roots) assist plants in absorbing phosphate through a complex mechanism. Hopefully, this will clear the misunderstanding....

I agree with Dilip Fouzdar (Down to Earth, September 15, 2004, Vol 13, No 8) that the solution to groundwater problems should be formulated by the hydro-geologists employed in the various state groundwater departments. The solution is indeed strictly site specific based on detailed geology and generalised solutions will not be effective.

The method mentioned by Sushil Kumar for draining the Tibetan lakes (Down To Earth, September 15, 2004, Vol 13, No 8) are used in tackling flood flow of the dams and are called siphon spillways. Every civil engineer would have studied about it and it is indeed an appropriate solution. It need not be a heavy concrete structure. It could be a series of big diameter pvc pipes to form a battery of sipons.

This is with reference to the piece 'Like a bull at the gate' (Down To Earth, Vol 13, No 6, August 15, 2004) The Chattisgarh government's endeavour to invest Rs 25 crore in importing bulls is an instance of the misuse of resources by those in power. The government would do well to share some of the assets at its disposal with the Animal Welfare Board of India which can be depended upon to take more concrete steps towards the improvement of the existing breeds of Indian bulls.

To change or not to change

Apropos the editorial 'The battle of the India bulge -- I' (Down To Earth, Vol 13, No 8, September 15, 2004), I see the macro-economic pyramid as a model that will persist till the end of time. At the very bottom of it are the hapless 600 million or more Indians eking out a living either in the countless poor, marginal, rain-fed or dryland cultivated farms or in cities well beyond their carrying capacities.

Unless this 'economic' pyramid is 'inverted', things won't get going. As the former prime minister A B Vajpayee observed upon alighting from the bus to Lahore, on both sides, the poor have not changed since independence. It is about time something was done for them.

It is a common practice to have wooden fences built around plots of soil growing vegetables. These fences are often treated with pesticides such as chromated copper arsenate (cca), which in turn causes leaching of arsenic into the soil. A greenhouse experiment was conducted to ascertain this. Carrot and lettuce plants were cultivated over a period of 10 weeks. It was observed that that the vegetables in the soils close to the cca-treated fences and utility poles were high in arsenic content.

Yet another greenhouse experiment was conducted wherein some batches of the plants were grown in compost-treated soil, while others were grown in soil containing phosphate. It was then observed that arsenic accumulation in the vegetables had increased in phosphate-rich soils -- 5-9 times for carrots and 3-10 times in the case of lettuce. This is due to the fact that phosphate tends to increase the soil solubility of arsenic. Biosolid compost application, however, tends to reduce arsenic intake by a good 79-86 per cent relative to the untreated soils. This suppression occurs as arsenic is adsorbed by biosolid organic matter.

The article 'More arsenic' (Down To Earth, Vol 13, No 8, September 15, 2004) was quite an eye-opener. The spread of arsenic contamination in groundwater seems to be assuming gargantuan proportions. What is worse is that inhabitants of the affected areas are unaware and the local authorities totally oblivious to this grave problem.

Though several research projects are under way to ascertain the nature and extent of the crisis, what is really needed is a massive publicity campaign to educate the villagers about the ill-effects of arsenic in their drinking water. Simultaneously, the agencies concerned, such as the Central Ground Water Board and the Rajiv Gandhi National Drinking Water Mission, have to come forward and identify the arsenic spewing from tube-wells, dug-wells and hand pumps in the affected areas. Their reports for a change need not be kept 'secret'.

A number of cheap filters are now available to take care of day-to-day filtering of water at the village/household level. These should be made available to the people at a subsidised rate. Groundwater is a state subject. Therefore, it is up to the states to monitor excess pumping of water. Unless the concerned state governments takes up the matter seriously, the cancers will continue to spread.

I am a native of the Ballia district of Uttar Pradesh. I am currently living in Mumbai. When I recently visited my village Bachhapar in the Sikandarpur sub-division, I was shocked to find that the drinking water obtained from the handpump was not the same as it used to be 10 years ago. The quality has suffered drastically. This news of arsenic increase and the apathy of officials is shameful and shocking. Campaigns should be organised in Bachhapar to alert the people and government alike. I remain grateful to Down To Earth for making us aware of the dismal state of affairs.

Current concern
The Sethusamudram project could well be one of the major environmental disasters of this decade. It has the potential to affect coastal communities over a large stretch of the Coromandel Coast. A series of public hearings are being held now in areas where the local communities are in complete opposition to the political parties, which have their storm troopers in large numbers at each hearing. The opponents of the project are being labelled anti-national (as usual). 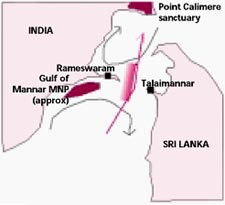 Here is a possible impact of the project (see map).

The Sethusamudram project envisages deepening the shallow part of the Palk Straits to allow large ships to go through the straits. The red bar indicates the approximate location of the channel to be deepened.

If the currents do not change due to the channel, then siltation will continue, and the project will fail.

But if the currents change and go along the channel, as shown by the red arrow, then coastal erosion is likely to be heavy at both Dhanushkodi and at Point Calimere. The project will succeed but chances are that the changed sedimentation patterns might totally destroy the coral reefs in the Gulf of Mannar Marine National Park (mnp).

If the Environmental Impact Assessment (eia) had been properly conducted, we would have had the correct answers to this question today. However, the eia conducted by the National Engineering Environmental Research Institute lasted exactly four months. It is then not surprising that the current changes have gone unmonitored, and the possible impacts of changing currents never spared the attention they deserved.