Cover story ‘Unravelling the food mess’ (October 1-15, 2010) highlights the importance of identifying the right recipients of the public distribution system (PDS). Small families do not get any incentives in the PDS, while large families are given more items. This practice should be reversed. Parents with more than two children should be discouraged by curtailing some items in their ration quota. Small families should be given additional items.

Twenty per cent people value a ration card as an ID proof, but they still use it to draw items from the PDS. This section should be issued separate ration cards. This will lessen burden on the PDS and reduce leakages.

A school of thought prefers doing away with PDS. It advocates clubbing subsidies and crediting money to the accounts of judiciously identified poor. People can procure food grains and provisions from the open market. This system will save money currently being spent on transportation and storage of consumer goods.

To sow or not? 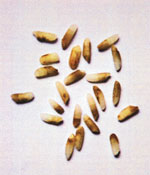 Punjab Agricultural University (PAU) and the Punjab government have been at loggerheads for the past one year over the rice variety, PAU-201. I am amazed that the university had to wait for expertise from the Centre to get clean chit for the rice, when it has world-class labs and farmers trust its name (‘Spotted rice gets clean chit’, October 16-31, 2010).

My father is a farmer and we have been sowing the rice variety for the past two years. We were happy, but this year the state government ordered not to sow PAU-201. Can you please tell us what is the status of PAU-201? Will we be allowed to grow it? We have stacks of PAU-201 seed.

As a farmer I feel PAU-201 rice variety is an exemplary work of the Punjab Agricultural University. It has proved excellent in the fields; it is less photosensitive and so does not get affected by cloudy weather. Even in poor soils PAU-201 can uptake micronutrients. It requires less water, the most critical input in agriculture.

On the flip side, this rice variety can exhaust soils because of its maximum biomass, but it is the only variety that can feed the nation.

India is home to 42 per cent of the world’s underweight children. It ranks below China and Pakistan in the global hunger index. 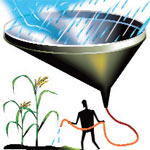 Government and the public should be ashamed that millions of children in the country are malnutritioned and do not get proper education. Ensuring food security is important. The Food Security Act should not be delayed on any account.

The question is not ‘From where our food will come’ (August 16-31, 2010), but how will it be produced? Encouraging farmers by giving required support price, building better infrastructure for storage, reducing input costs, supplying better seeds and irrigation facilities may help achieve the target. In this context tapping roadside rainwater harvesting is important. Food security should also be taken into account.

The editorials ‘From where our food will come’ and ‘Control your food. It is your business’ (October 1-15, 2010) fall flat towards the end. Every year we use cow dung to grow rice, and get a good crop. No question of poisoning the soil with chemicals. Cow dung is a low-cost fertiliser but not low-yield. The write-ups did not bring out the importance of cow dung in food production.

Cow urine is the best and cheapest pesticide when mixed with water but Indian cows are being killed at an alarming rate for meat. Even an old cow or bull produces dung for the fields, so they never become useless. 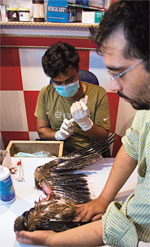 Being a bird researcher, I was moved by the efforts of Nadeem Shehzad and Mohammad Saud to protect kites injured by manjha (see ‘Helpline for birds’, October 1-15, 2010). The government should set some standards for the makers of manjha, kite string, to save the raptors. States and non-profits should act, and not just issue guidelines.

Dams all the way

India needs dams. They benefit society (see ‘Rivers must flow’, October 16-31, 2010). Period. The questions that arise are: how many, where and at what cost? What should be the height and design? Who will benefit? There are many gaps which need to be filled before starting projects, otherwise they can result in conflicts between people in the area and people behind the project.

The need of the hour is to plan dams on the basis of requirements. Participation of stakeholders and people affected by the project should be included at all levels. Such a strategy will put dams to good use and will promise an effective management of water.

By permitting access to information irregularities of the Asian Development Bank (ADB) will be revealed (see ‘ADB averse to sharing information’, October 16-31, 2010). Most retired engineers of state government handling ADB projects get more salary than the state’s chief secretary.

Academicians and scientists underestimate the effects of 168 dams on the ecology of Arunachal Pradesh (see ‘Downstream Impact’, October 1-15, 2010). Government organisations are full of unqualified officers. As a result the planning commission ends up using incorrect methods of development that hamper environmental sustainability.

For all the big dams in India, requisite assessments, like environmental impact analysis, were placed before the authorities but they failed to pinpoint the mistakes in them due to lack of expertise. Who will suffer in the end? The public and the environment. The government should treat the construction of dams in Arunachal Pradesh as a national problem, not development.

Do not APE others 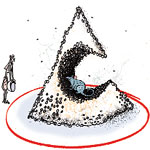 The editorial ‘Fix what is broken’ (October 16-31, 2010) delivers a clear message: change the administrative system that does not function well.

The agenda of change and innovation in India should not be a mere copy of what is happening in other countries. We need to be more proactive in revolutionising the country in our own context so that it emerges as a progressive and welfare-oriented liberal democracy.

The government should stop forming more authorities to check controversies because these newbies will create further mess. The solution lies in panchayats. The Centre should ask the panchayats to collect food grains from depots. This will not only save transportation costs but also highlight the capabilities of panchayats.

The bid by the Union Ministry of Environment and Forests to save diminishing wetlands of India is a welcome move (see ‘Centre proposes control over wetlands’, July 1-15, 2010). It shows the government’s renewed interest in ecology. Such actions help fight climate change.

I recently visited my village Rithal in Rohtak district of Haryana. Farmers have sown dhaan (rice) in Kharif season this year but a large amount of crop has been damaged mysteriously.

Being a science student, I tried identifying the problem but in vain. All the farmers sprayed pesticides to stop further damage and were successful, but only to an extent. The problem starts from anywhere in the field and gradually covers the entire area. In three to four days the rice plant becomes dry and cannot stand. I want to know that if it is a disease caused by bacteria, fungi or viruses? Or is it caused by an insect pest? Kindly provide an appropriate solution.