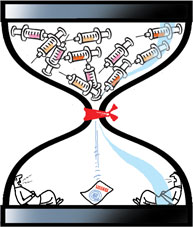 LICENCES of public-sector, vaccine-manufacturing units were restored more than a year ago. But the units are yet to resume supply of vaccines to the Centre’s Universal Immunisation Programme, and it will not happen any time soon if one were to believe activists.

The Central Research Institute (CRI) at Kasauli in Himachal Pradesh, the Pasteur Institute of India (PII) at Conoor in Tamil Nadu and BCG Vaccine Laboratory (BCGVL) at Guindy in Chennai were meeting 80 per cent of the vaccine requirement for the government immunisation programme till 2008—the year the Drugs Controller General of India revoked their licences, citing non-compliance with the good manufacturing practices of WHO (see ‘Get your own vaccine’, Down To Earth, July 15, 2009). Since then the government has been procuring the vaccines from private companies at higher prices (see ‘Vaccine procurement price’).

While CRI officials said they are resuming supply gradually, Union Minister of State for Health Dinesh Trivedi did not specify when it would be resumed by the other two units. He was replying to a question in Parliament on February 25. When CPI(M) member of Parliament T K Rangarajan visited PII and BCGVL facilities recently, he found the two units had not produced a single dose of vaccine for supply since their licences were restored early last year (see ‘Vaccine units need booster shots’, Down To Earth, April 15, 2010).

Start up problems or conspiracy? When contacted, K N Venkataramana, assistant director of PII, said production had started last year. “But there are some technical glitches. We cannot say when we would be able to supply for the immunisation programme,” he said. Rangarajan explained what these glitches meant. “Funds allotted for reviving PII—about Rs 140 crore—were not utilised properly leading to problems.”

PII had produced 51.2 million vaccine doses of which only 250 cleared quality tests, resulting in loss of Rs 10 crore, said Rangarajan. He alleged that there is a deliberate attempt not to allow the institute to function. For instance, the director of drugs control at Chennai suspended the production of tissue culture anti-rabies vaccine at the institute in December 2010. The suspension was based on an inspection conducted two years before in January 2008 and did not take cognisance of the fact that the facility had been upgraded since then.

Similar conditions prevail at BCGVL. There was a plan to convert it into a testing laboratory. Now the plan is to reconstruct and upgrade the facility to meet international standards, said a health ministry official. “During my visit, I felt the government was not keen on fast-tracking manufacture of vaccines at BCGVL,” said Rangarajan. His claim is reinforced by a recent communication from the Drugs Controller General’s office. It ordered production and supply of equipment be stopped with immediate effect in the unit because of some technical snag, said a member of the parliamentary standing committee on health and family welfare.

The 43rd report of the parliamentary committee, presented in Rajya Sabha last August, commented on the ministry lacking the will to revive these units. Sanjai Sharma of the Human Rights Law Network, a collective of lawyers and activists, said there seems to be a “conspiracy between the government and private manufacturers to keep the units crippled forever”.

‘De-licensing decision wrong’ A ministerial committee, headed by former health secretary Javed Chaudhury, had termed the process of de-licensing “extremely unsystematic and scattered”. The panel, asked to review the reasons for suspension of licences of the three units, submitted its findings in February last year. The report said there were no quality problems at the units.

Chinu Srinivasan, a public health activist and one of the petitioners in the ongoing Supreme Court case challenging closure of vaccine production facilities, sought criminal prosecution of Anbumani Ramadoss, the former Union health minister in whose tenure the units were closed.

The closure of units has not only doubled government spending on vaccines but has also led to a shortfall of vaccines. The government admitted to a shortfall of 112.2 million doses of vaccine in 2008-2009 and 170 million doses in 2009-2010 for its immunisation programme. The admission was made in December 2010 in response to a Right to Information application filed by K V Babu, an opthalmologist from Kerala.