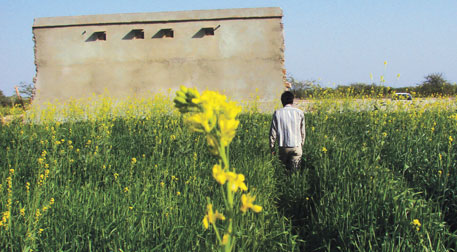 IT has been a year since Jairam Gurjar was shifted from his village inside the core area of Sariska Tiger reserve in Rajasthan. But the pucca house he has been given at Mojpur Rundh near Alwar and the ripening mustard fields he owns do not make him happy. Jairam, along with 24 other families, was shifted from his generations-old home in Umri village by the forest department to make space for the big cats in the reserve.

According to the National Tiger Conservation Authority (NTCA) guidelines, a non-dependant person and his adult sons are considered individually eligible for compensation. In Jairam’s household, only he and one of his two sons received compensation. “The department officials said my younger son and nephew (both adults) will get the package once we shift,” says Jairam. “The entire village has been relocated but we have not received the compensation. When we asked for it, they said that was all they had for us,” he adds.

Umri is one of the 28 villages inside the core area of the tiger reserve. After Sariska lost all its tigers in 2006, the state government decided to relocate the villages from the core. Since then, only one village has been completely relocated before Umri.

The Forest Rights Act (FRA) mandates that forest dwellers cannot be evicted from forestland unless their traditional rights over forest resources are recognised. In Alwar, the implementation of FRA has not started yet, claim residents and NGOs. “The committees to process the claims under FRA have not been formed in the district. When we tried to mobilise the villages to demand their forest rights, the forest department restricted our entry in the villages,” says Aman Singh of NGO Krishi Avam Paristhitiki Vikas Sansthan in Alwar.

Under FRA, it is mandatory to acquire written consent from the gram sabha for resettlement process and the proposed compensatory package. Umri residents say they gave no such consent. “They took signatures of individual families on the consent form by putting pressure. They even threatened us with false charges of forest offences,” says Chhotelal Gurjar.

Sariska officials refute the claim. “We obtained the consent of the gram sabhas long back. People want unlimited access to resources which we cannot allow because it will affect wildlife. When we restrict their activities as per the law, they allege we are forcing them to leave,” says Shekhawat. “We processed their claims under FRA in 2010 itself,” he claims.

The NTCA guidelines propose two options for compensation. One, a family can take Rs 10 lakh and move out of the reserve without any involvement of the forest department. In Umri, 31 families opted for the cash package. Two, they can opt for relocation by the department. Under this option, 35 per cent of the total package (Rs 10 lakh) is used to acquire agricultural land, 30 per cent is spent on settlement of forest rights, 25 per cent goes into house construction and 10 per cent is given for developing community facilities.

In keeping with NTCA guidelines, Sariska officials offer cash package but have modified the second option. They provide 1.5-hectare (ha) agricultural land, a 500 sq m plot and Rs 2.5 lakh for house construction. It also offers Rs 1 lakh per family for developing community services, but provides nothing for the settlement of rights.

As per the NTCA guidelines, residents should have the choice to decide which type of compensation they want. However, during a meeting of the district relocation committee of Sariska in 2008, a cut-off date was announced for residents to decide the type of compensation they want. The committee said if a family failed to zero in on an option, they would be given the cash package. Singh says in many villages even if the residents want the package involving land and rehabilitation, the forest department forces them to opt for cash. “For many families, Rs 10 lakh is not enough to compensate for what they had in the forests. They prefer land package as market value of land has increased manifold over the years. But the department insists on cash, citing land shortage as the reason,” adds Singh.

During the meeting, the Sariska administration also said it would provide basic facilities like electricity, roads, school and a community centre in Mojpur Rundh. Sultan Gurjar, new resident of Mojpur Rundh, says, “They promised one electricity connection for borewells for a group of five families. Most of the families have invested in borewells but have not yet received the connections. We are forced to buy electricity at Rs 125 per hour.” As per FRA, resettlement cannot take place until land allotment and the promised facilities are complete. Shekhawat explains the amount for community service development has been transferred to the eco-development committee of the village. “Now it is up to the committee to decide how to spend the money. We are guiding them,” he says.

Jairam, meanwhile, is struggling to regain his livelihood. “I had around 100 goats in Umri. I would earn Rs 500 every day by selling milk. Now, most of my goats have died as there is no arrangement for grazing,” says Jairam. “For the initial six months we did not know how to practice agriculture. It was only three months ago that we sowed mustard in the fields,” he adds. The compensation money he received has been spent on the house and levelling of fields. The borewell, pump and electricity connection have landed him in debt.