Is donating blood beneficialfor your heart? 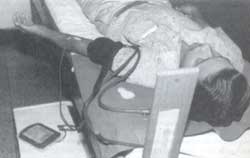 BLOOD donors are usually looked upon as altruists. But what most people, including the donors themselves, do not know is that by donating blood they are only prolonging their lives. Finnish researchers claim that they have discovered striking evidence that blood donors are far less likely to succumb to heart attacks than those who do not donate blood.

Jukka Salonen and his colleagues at the University of Kuopio in Finland say the results of their study support earlier findings that people with more iron in their bodies are at a greater risk of heart attacks. But they had never thought that the link would be so strong. "We were extremely surprised ourselves to find such a strong relationship between blood donation and protection against heart disease," says Salonen (American Journal of Epidemilogy, Vol 148, p 145).

Salonen and his team looked at the medical records of 2,862 men over a nine-year period. Of the 153 who were regular blood donors, only one - a mere 0.7 per cent - suffered a heart attack. In the other, non-donor group, this figure was as high as 12 per cent.

The lower rate of heart attacks among the blood donors may be because blood loss lowers iron levels. In May 1998, Salonen's learn reported that men with large iron stores in their bodies were more than twice as likely to have a heart attack as those with less iron. Test tube and animal studies have already shown that high iron levels encourage the formation of a free-ridical form of cholesterol that damage arteries.

Kay-Tee Khaw, an epidemilogy expert at the University of Cambridge, UK, is cautious about Salonen's conclusions. "What they found is intriguing and I wouldn't dismiss it entirely. But we have to be careful. We've had, our fingers burnt so many times before."

Khaw points out that more than a quarter of the non-donors were known to have suffered previous heart disorders, but for the group of donors the figure was far smaller, just 8.5 per cent. "I'd have liked them to take out all the people with baseline heart disease," she says.

And Salonen concedes that the men who had given blood might well have come from a section of society that is a lot more health-conscious than average. "We tried to allow for this in the statistical analysis, but it's possible that some bias remains," he says.

However, Salonen believes selection bias could not completely account for the spectacular difference in heart attack rates between the two groups. "We're convinced a link between blood donation and lowered heart attack rates exists," he says. Philip Poole-Wilson of the London-based National Heart and Lung Institute is not yet convinced: "They could be right, but it's not proven." To do so, Salonen is planning to organise a study in which healthy people are randomly divided into a group that donates blood and a control group that does not.