Researchers provide evidence that rocks may have carried microbes across planets 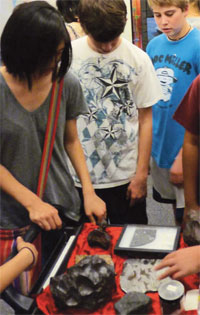 QUESTIONS like how or where life began, and how widespread it is in the universe have perplexed scientists and laypersons alike. Panspermia, one of the many theories on origin of life, suggests life’s building blocks came on earth from outside. But it is equally plausible that Earth itself may have seeded life on other planets.

Panspermia is a Greek word that literally means seeds everywhere. The theory, thus, indicates the seeds of life are ubiquitous in the universe and can be propagated from one place to another through space. Exchange of microorganisms living inside rocks that are expelled from a planet and serve as a vehicle for transportation to another planet could also take place among solar system planets, a phenomenon known as lithopanspermia.

Most scientists, however, deemed the idea highly improbable. They argued that rocks let loose in space during early phase of our solar system travelled at such high speeds that it was not possible for gravitational pull of planetary bodies to have captured them. A team of researchers from Courant Institute of Mathematical Sciences in New York, Centro de Astrobiologia in Spain and University of Arizona and Princeton University in the US has now provided evidence for a new schema of how life arrived on Earth like planets and spread beyond during solar system’s infancy.

The researchers employed mathematical simulations of the star cluster in which our Sun was born to show that the meteoroid exchange between planetary bodies could have been significantly more efficient than previously estimated. They proposed a ‘weak transfer’ model to explain a low-velocity process wherein rocky material escapes from the orbit of a large object and gets sucked into the orbit of another. The model showed it is more plausible than previously thought that transport of solid rocky material happened between planets of different solar systems at lower speeds.

The findings were published in Astrobiology in August, 2012, and were presented by the researchers in September this year at European Planetary Science Congress in Madrid. They surmised that out of zillions of rocky fragments released from our solar system, five to 12 out of 10,000 could have been captured by another solar system. Earlier studies had given the occurrence a slim chance of one in a million.

One of the debates surrounding lithopanspermia is whether transfer of life happened mostly within our solar system or other solar systems were also involved. The study, however, does little to explain this.

“The study also does not satisfy those who believe life’s origin was difficult, occurred on only one especially fortunate planet in our galaxy and was later spread by a natural process from star to star,” says Jay Melosh, who is a distinguished professor of earth, atmospheric and planetary sciences at Purdue University.

“It is not really a solution to the problem of the origin of life as it implicitly assumes that life originates quickly and easily wherever stars are born,” says Melosh. He had suggested in 1988 that abundance of Martian meteorites that fall on Earth every year proves that transfer of life between the planets within the solar system is more viable than between solar systems.

For lithopanspermia to occur, microbes need to survive a long, arduous journey in space, drenched in radiation. Previous studies have shown survival spans vary from 12 million years for a rock of 2.5 centimetres diameter to 500 million years for a rock 2.7 metres across. Experiments done in the past have confirmed sufficiently large rocks may protect embedded microorganisms from radiation and the hazards of the impact of landing—conditions akin to those suffered by Martian meteorites.

Any answer to how life itself evolved along with its immense biodiversity or how it got transformed into “intelligent” life, is still elusive and defies definite explanations. From microbes to humans is a very long shot indeed.