Life in one dimension 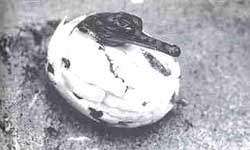 THE transition of an embryo into an adult - for instance that of an egg into a chicken - is accompanied by a bewildering variety of changes. Due to these complexities, progress in embryology is likely to be staggered with problems never having single, all-encompassing solutions. As a result, certain question marks remain positioned just where they were 100 years ago!

One such unsolved issue is related to the fact that the differentiation of cells that make up the various parts of an embryo is a highly coordinated affair. Embryologists have so far failed to unravel the mystery as to how each small group seems to know exactly what it has to differentiate into. So far, two kinds of explanations have been fielded. The first believes that the direction in which a cell differentiates is pre-ordained. The other possibility is that a process of spontaneous self-organisation generates from what was originally a mass of identical cells. Nothing amplifies the distinction between these two extreme views as starkly as the case of the slime mould (Bonner J T et al, 1995, Development in One Dimension: the Rapid Differentiation of Dictyostelium discoideum in Glass Capillaries).

The slime mould displays a very unusual form of embryonic development, that the embryo rises not from successive divisions of a fertilised egg, but by the aggregation of thousands of single amoebae. Thereafter, these amoebae differentiate. One-fifth of these in the front secrete a cellulosic tube, dying in the process, and four-fifths of those at the back form spores.

Both these explanations seem close to the truth. If one imposes a pre-existing heterogeneity on the system (for example, by mixing two populations of amoebae raised under widely differing levels of nutritional availability), one can predict with some accuracy the likely fates of the two lots. Also, under certain conditions one can get differentiation into the correct proportions even when there is no spatial pattern.